Biochemistry senior Morgan Snider is using her UGRP grant to take a close look at your food. Inspired by the infamous ‘Dirty Dozen’ of organic food, she intends to study apples and corn in particular. “There’s a lot on that list that kids like to eat,” she says. Apples and corn are respectively listed among the Dozen as the most and least contaminated grown foods; as such, she will be testing pesticide residues (specifically diphenylamine and kresoxim-methyl) on apples between organic and conventional growth to see if organic tactics have a true health benefit over non-organic ones. She will also test organic corn against the frozen variety, with an emphasis on GMO DNA.

With guidance from her faculty-mentor, Dr. Tami Sivy, Associate Professor of Chemistry, Snider has used the opportunity of research for the problem-solving experience. She used the better part of the first semester “trying to get samples into a state that can be analyzed,” but she recently did exactly that. Her samples are now on the instrumentation and ready for investigation. She hopes to find that the organic versions of these foods truly do have lower concentrations of these harmful chemicals, as this is not always the case. “Certain foods with shells or rinds are more resistant to chemicals,” Snider says, “so there’s not actually a benefit to buying organic. I still eat non-organic apples, but that may change after this research.”

Snider will be presenting her findings in March at the American Chemical Society Meeting in San Diego, as well as at the Research Symposium at SVSU in April. She would like to attend grad school to study environmental toxicology and continue to research the effects of pesticides on human health.

Electrical and Computer Engineering senior Shane Oberloier is working with Dr. Yu Zou, Assistant Professor of Electrical and Computer Engineering, on a faculty-led UGRP grant to perfect a newer, greener way to manufacture circuit boards. After considering multiple preexisting methods, including one involving conductive ink, he and his fellow researchers decided to pursue a four-part method based around the application of copper tape in their builds. “It’s a green technology because there’s no byproduct,” he explains. “The typical methods are subtractive instead of additive. At first, we thought about ways we could just add to industry standards, but that’s not what the point of research is.”

Though the project is not yet finished – the tape applicator still needs building – Oberloier says the challenges have resulted in a valuable emphasis on bigger thinking. “It forced me to think of everything in the process, from mechanical to electrical to software and increased my consciousness of an entire system,” he says. “Each part had to integrate, communicate, and function.”

If the project is not completed before Oberloier graduates, he intends for it to be handed down to another group of students. He would like to either attend graduate school to study Engineering or to continue his work designing data acquisition systems at Wyman Technology.

Metastasis, the spread of cancer from one organ to another, is the cause of nearly 90% of cancer-related death – but Biochemistry Junior and Midland-native Kathy Warrick aims to drive that percentage down. Under the guidance of Dr. Jennifer Chaytor, Warrick is attempting to determine a method behind the synthesis of Stylissamide X, a chemical compound believed to inhibit metastasis.
“We’re comparing the biological behaviors of our synthetic compound to the naturally-occurring one,” says Warrick. Stylissamide X occurs within a variety of marine sponge, though Warrick claims that synthesis could “generate a more potent and specific compound.”
The process has been complicated: while Warrick approached the project with a specific timeline and order, unexpected hurdles continue to force her to remain flexible. “We’d been planning on carrying out more with the first variety we synthesized, but we had some inconclusive results,” says Warrick. After those results, a second method of synthesis had to be developed. Warrick has now finished synthesis using both approaches and is in the process of purifying and characterizing the new synthetic compound.
She has presented the project at the local American Chemical Society meeting. Pending the results of the grant-funded research, she may continue to do so at other events and conferences. Though she has not yet determined a specialty, Warrick would like to attend medical school after graduation.

The connection between libraries and the issue of homelessness may not be immediately apparent. “There’s already a lot of research about homeless people,” says social work Senior Erik Rebain, “but there is little data on their use of public libraries and the services they provide.” Rebain, working alongside fellow social work Senior Marianna Cuevas, is using grant-funded research to study the relationship between homeless individuals and public libraries in order to determine whether a social agency within a library would prove beneficial for the community in which they operate.
The team has spent most of its time in the field, within any of the nine focal libraries in which they collect data and transcripts – these include major libraries in Marquette, Detroit, Lansing, Saginaw, and Flint, among others. They hope that this will show this issue is not isolated to a single type of locale. “It’s interesting that a lot of libraries say they don’t deal with many homeless individuals,” says Cuevas, “But once you get them talking, the problem is actually bigger than they let on.”
The duo has determined that many libraries and the social services they offer render them functional as social service agencies – but without a social worker on staff. “The policy [on homeless assistance] generally says one thing and the library will do something else,” says Cuevas. “They sort of work around the policy to help.” Several libraries involved in the project have requested copies of the final report in order to adjust their own policies accordingly.
The experience has allowed the duo to take on the bulk of the responsibility while delving into the real-world applications of their areas of study. “I wrote a majority of the interview questions,” says Rebain, “and [faculty advisor] Mark Giesler lets us conduct some of the interviews.”
After graduation, Marianna Cuevas will continue towards a Master’s Degree in Clinical Social Work at Michigan State University. Erik Rebain will pursue his Master’s in Library Science.

Social Work student, Briana Reed, is researching the very popular video game, Grand Theft Auto (GTA5), with three faculty mentors. Dr. Sheruni Ratnabalasuriar, Dr. Timothy Rowlands, and Dr. Melissa Hobart. As part of their research, Briana has been playing GTA5 to identify various themes related to race, gender, and class. The researchers are examining the relationships that exist between the images portrayed in the videogame and real-life and are questioning the implications of these relationships.

As Briana has worked on this research project, she has grown close to her faculty mentors and truly values the knowledge and support they have provided. Briana excitedly states, “I love my mentors, they are very helpful and insightful.” She appreciates the experiences she’ has had as a UGRP student and is happy to have been provided with this hands-on research opportunity. Briana explains, “I have always been really interested in human, woman and black rights, and it’s been rewarding to examine these issues through this research project.”

Briana plans to graduate from Saginaw Valley State University with her Social Work degree in May, 2019. In the meantime, Briana and her mentors plan to have their research completed by December 2016. The research team will present their findings at the SVSU Student Showcase in April. 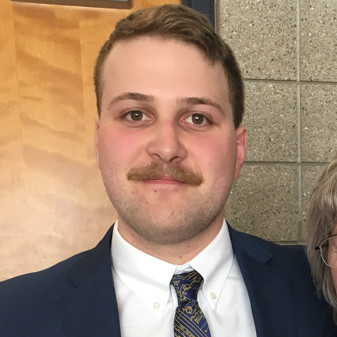 Have you ever thought to yourself, “Hey, somebody should invent something to fix that”? If so, Senior Electrical and Computer Engineering major Alex Shibilski says why not make sure that somebody is you. With this philosophy in mind, Shibilski has made the most of his time as a student at SVSU.

As Shibilksi was working through his courses, he realized there were only a few upper-level classes designed to cover exactly the topics he was most interested in. He decided to take matters into his own hands and reach out to faculty to participate in his own independent study. Most recently, Shibilski has been working with his mentor, Professor Sandun Kuruppu. Their current project titled, “Clock Variation Impact on Digital Filter Performance” has been accepted for presentation at the IEEE conference in New York City, NY in November. Shilbilski has received a UGRP student-travel grant to cover expenses to present his work.

In December, Shilbilski will be graduating from SVSU. He is currently in the process of applying to graduate programs and looks forward to the opportunity to work on a master’s degree specializing in circuits. He anticipates the research he has done while at SVSU will ensure he is well-prepared for graduate studies. One day Shilbilksi hopes to find himself involved in the creation of circuit chips with real-world applications like increasing phone battery life or developing new tools for communicating. As Shilbiliski reflects upon his time at SVSU, he offers some advice to younger students; if there is something you are interested in, you should explore it. Don’t hesitate to find a faculty member to help mentor you and provide structure, and then...”just go chase it!”