Then and Now
Printmaker and Educator
UAG Exhibition Artist

In this lecture, Brodbeck explains the printmaking process and her artistic inspiration.

Banowetz is a Denver based artist who works professionally in sculpture, design, and education. She graduated from Colorado State University in 2004 with a Bachelor of Fine Arts degree in Sculpture. Banowetz’s current practice involves crafting sewn inflatable sculptures into delicate forms that address vulnerability and struggle.

She has worked internationally through artist residencies and freelance projects in India, Italy, Ireland, Russia, Germany and England. Recent projects include participating in the Denver Children’s Museum residency program, where she created large inflatable sculptures inspired by children’s drawings of microscopic creatures. Banowetz has been invited to the AARK Archipelago Art Residency in Korpo Finland to complete her new work for the the Environmental Art Exhibition Barfotastigen (Barefoot Path) opening in June 2018. She will also be in residence in with Breckcreate in Breckenridge from July to August, 2018 in preparation for her work in the Breckenridge International Festival of the Arts.

Banowetz will lecture on her overall artistic process as well as the research and collaboration behind the exhibition in the UAG.
Photo by Michael Wickham 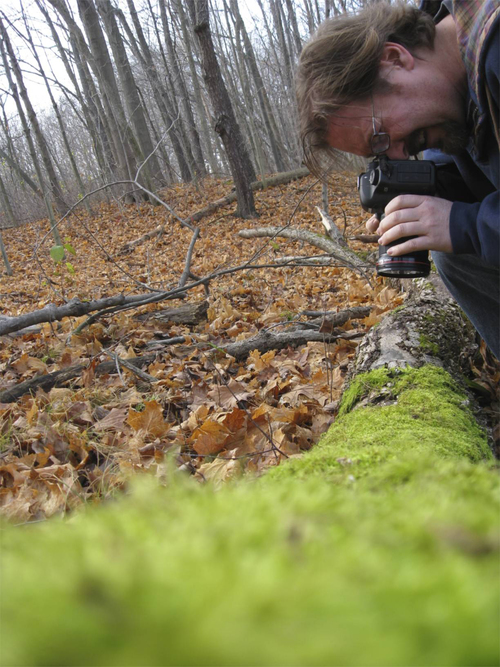 Christopher Schneider is a professional artist and photography adjunct at Lawrence Technological University and Oakland Community College. He obtained his MFA from Cranbrook Academy of Art, and is also the founder and gallery coordinator for Hatch: A Hamtramck Art Collective. Schneider has exhibited internationally, and recently won a $5,000 ArtPrize Pitch Night grant for Anonymous, an interactive sculpture created with fellow artist Nina Caruso.

Schneider will present a lecture off of his artistic practice prior to the reception for the Digital Space (4) Exhibition. 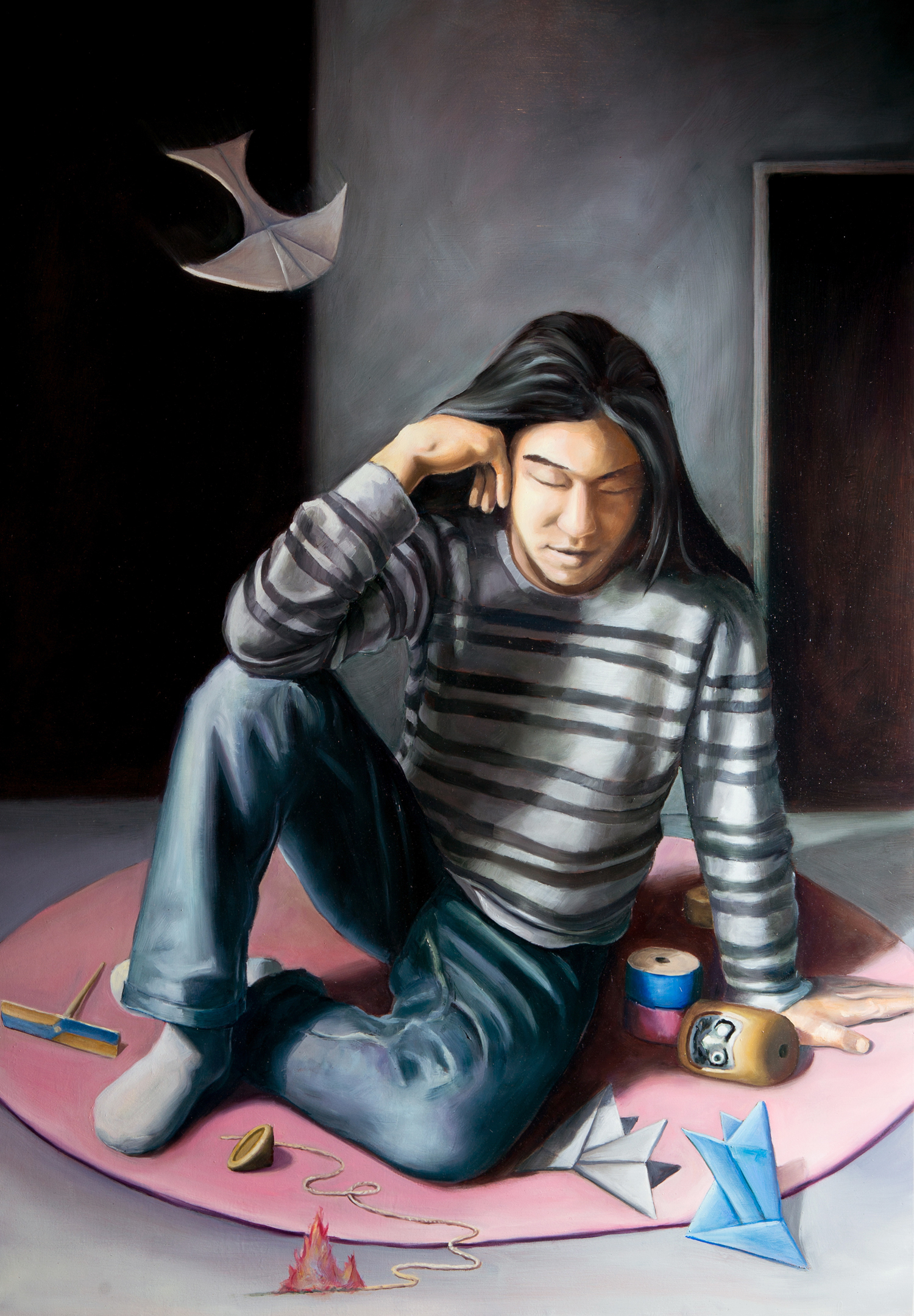 Searching for the Middle Path

Lecture: Thursday, October 26th 3 - 4 pm
The video can be found at the bottom of the exhibition page linked above. This lecture is made possible in part by a grant from the Michigan Humanities Council, an affiliate of the National Endowment for the Humanities.

The A to Z of Golden Brand Acrylics 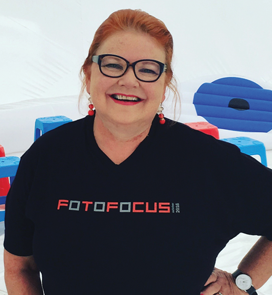 This lecture packs in a ton of valuable information about acrylics, guiding attendees through the basics while introducing new possibilities. Gain information about mineral and modern pigments and how this relates to clean color mixing, glazing and the creation of fabulous new colors. The demonstration includes an array of examples of acrylic materials put to use. Attendees leave the lecture enthusiastic to explore the extensive potential of acrylic painting! The lecture also includes a brief introduction to Golden’s non-acrylic products, Williamsburg Handmade Oil Colors and QoR Watercolor.

Valerie Allen is a professional artist, a Golden Working Artist for the state of Michigan, and the Curator for Studio 23/The Arts Center in Bay City, MI. She received her BFA from the University of Cincinnati and has participated in various international exhibitions.

On Friday at 6:30 p.m. in Arbury 159, there was a poster display opening where Ota talked through his career progression as well as the development of his own independent design studio.

On Saturday, Ota was the keynote speaker for the "Where the Rubber Meets the Road" American Institute of Graphic Artists (AIGA) Portfolio Review.

Ota's artwork has appeared in renowned publications such as The New York Times, HOW Magazine, STEP Magazine, and Communication Arts. His most recent publication was a feature in the book, "Graphic: Inside the Sketchbooks of the World's Great Graphic Designers.”Originally from Japan, Ota studied art and design at the University of Idaho, where he earned a bachelor's degree in graphic design.

Ota has been praised for having a "unique, artsy, wild style," by Lost at E Minor, an online publication that focuses on art and music. His unique style has drawn the attention of Starbucks Coffee, for which he designed a "Green Cup" released for a limited time in November 2016. Other clients of Ota's include Lucky Scooters, Kinatonic Gin, Seven Coffee Roasters, The Growl Store, Magnolia Moonshine, Big Gin and many others.

"I don't know why this posts twice?? Sorry." 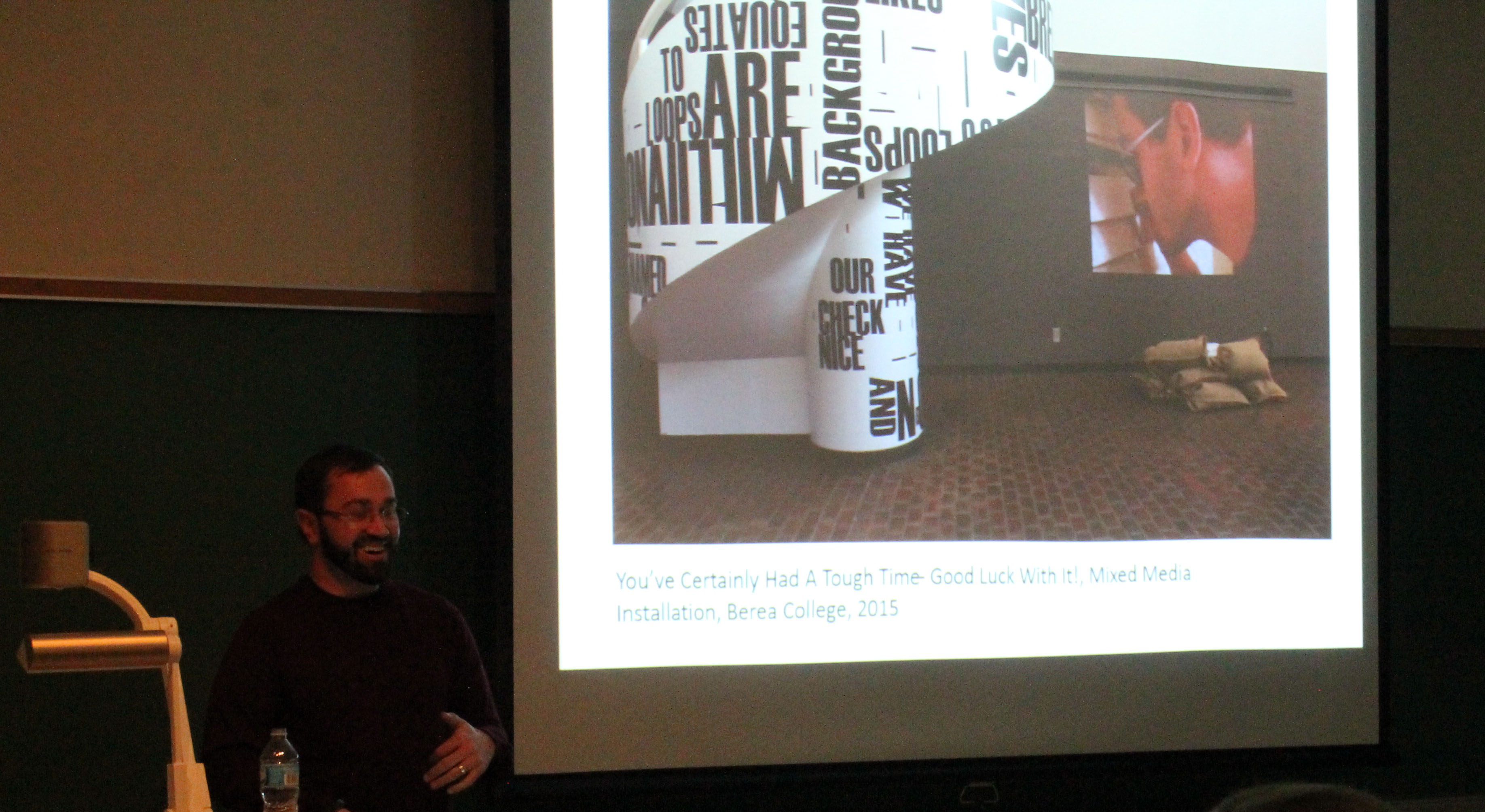 Jonathan McFadden is the Assistant Professor of Printmaking in the School of Art & Visual Studies at the University of Kentucky. His print and installation work pulls its influence from social media outlets, specifically his neighborhood association’s Facebook Page and juxtaposed against imagery pulled from a variety of news sources as a means of balancing how social media acts as both Richard Stallman and Julian Assange put it, as a surveillance engine.

Mike Mosher’s "Meter-Reader" artworks are a body of paintings, drawings and other artworks he completed during his Fall, 2014 sabbatical. It makes use of the artist’s inherited collection of mid-century analog (pre-digital) voltmeters and ammeters as subject matter, visual motif or assemblage elements, in numerous paintings, drawings, sculptural installations, photographs and copy-machine prints. 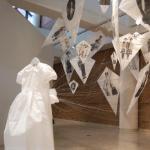 Heritage Habitats is a series of physical spaces for contemplation and invocation of ancestry. Framed around nostalgia and memory, Kites, Cairn, Grove and Roots are large scale, sculptural and experiential installations that engage in viewers’ unique memories and experiences. In essence, the work emphasizes commonalities that bind people and cultures and serve as an expression of humanism.

"The Journey... along the way"
Painter
UAG Exhibition Artist

"The Journey... along the way" 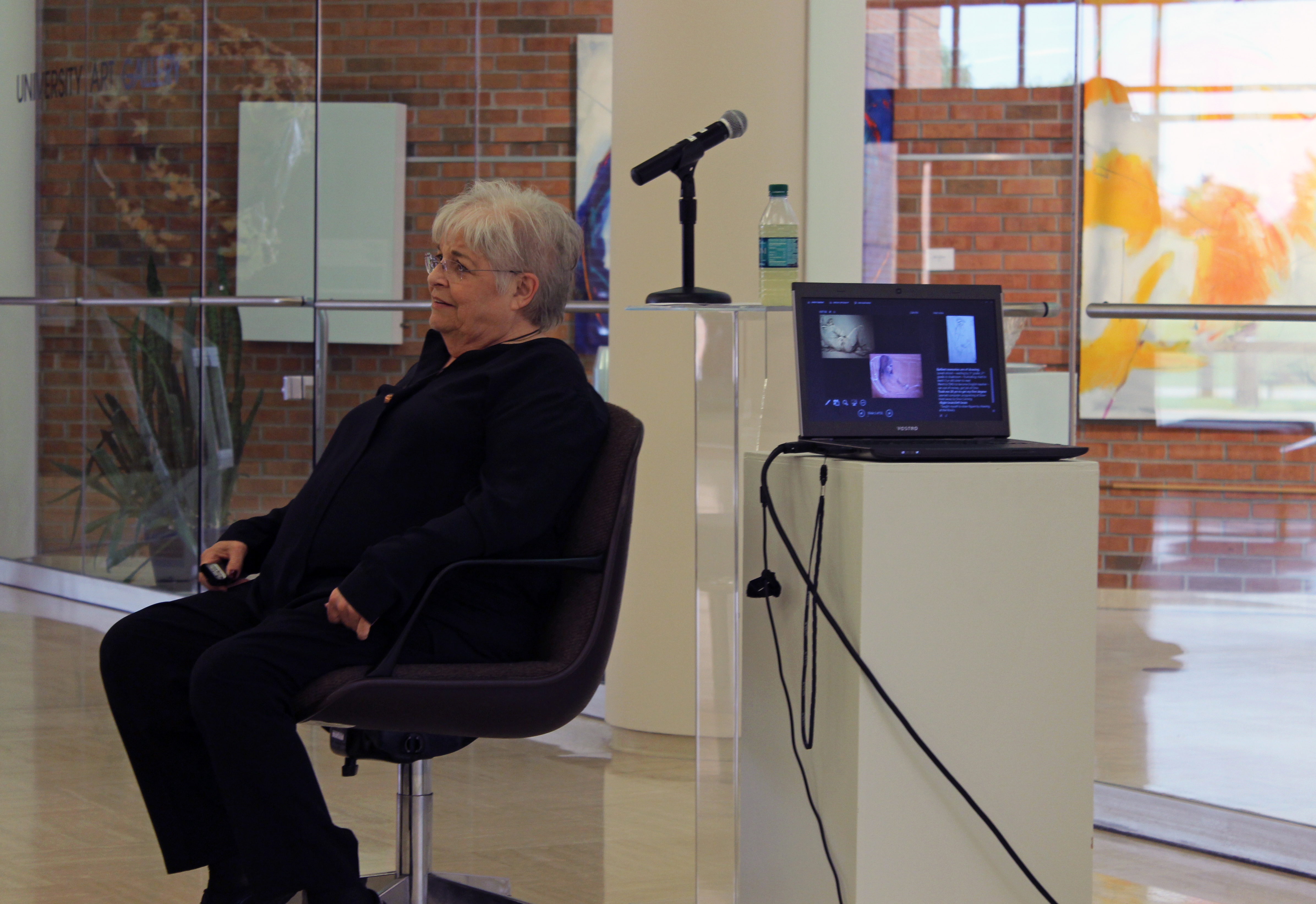 Artist's Statement
I consider myself a colorist. The focus of my painting is the relationship of color and energy. Color is a universal language. Each viewer brings his or her own meaning to the colors in my paintings. With energy as my primary interest, I explore other areas that have energy as a focus. Geometry has links to energy through the triangle and diagonal lines. Other universal shapes have ancient ties to energy - the mandala as a symbol of self, the spiral as a symbol of journey. Much of today’s art reflects the dark and pessimistic nature of life in our world. I believe art can be a positive force, helping to raise the viewer to a higher emotional level by providing that positive energy as a focus 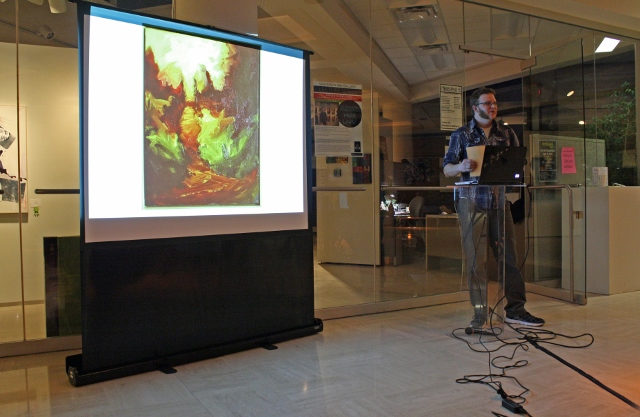 Lewis is currently an art teacher at Swan Valley High School and he actively shows his work in the Detroit arts community and gallery district. He received his BFA from the College for Creative Studies in 2002 and K-12 Certification/Art Education from SVSU in 2005.

Artist Statement
My work evolves out of a necessity for the work to come into being. The work is a necessary activity for me in terms of a meditation, reflection, and possibility of self actualization. The work has become more focused in recent years on thoughts and meditations of spiritual exploration and psychological activity, both conscious and unconscious.

These recent pieces are for me, Psychological Landscapes. These Paintings and Watercolors explore an imaginary psychological landscape that is easily accessed by our own understanding of both figure ground relationships and the familiarity of the landscape format. These works have no specific narrative and instead utilize a matrix of what I consider to be personal mark making activity. This activity results in the creation of unconscious personal symbols that represent for me the idea of the unknowable, or the unknowable by intellect, in effect, the idea of symbolizing what is instead a part of you, and therefore transcends knowing and unknowing. It is therefore a representation of the mystery and a record of the meditation. 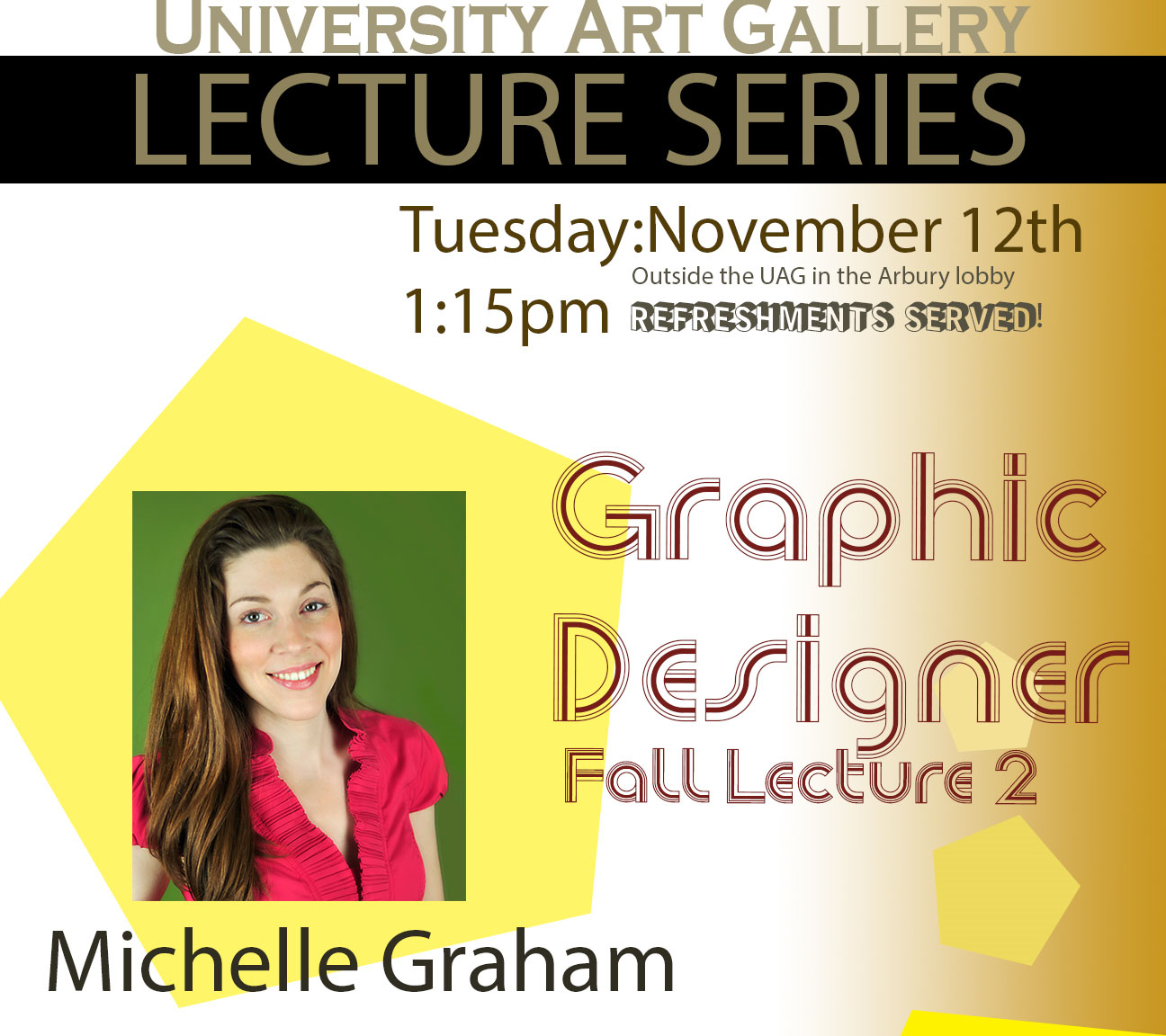 Graham graduated from the College for Creative Studies in 2009 with a B.F.A. in Advertising Design and a minor in Photography. While attending college she was awarded numerous scholarships and internships for branding and marketing competitions in 2008 and 2009. After graduation, she started her career with an internship at Campbell Ewald Advertising. By 2011 she worked her way up as an Art Director on the GM Customer Relationship Management Team.

Currently, she works as a graphic designer at Group 55 Marketing, a small marketing and advertising agency in Detroit. In her spare time, she designs Detroit themed merchandise for her own emerging company Design for Detroit that sells at art fairs and online.

Schefman discussed his personal journey through the arts as well as teaching.
Painter and Educator
Visiting Artist Lecture

Schefman discussed his personal journey through the arts as well as teaching.

Robert Schefman has exhibited in Europe, Asia and throughout the United States. His works are in the collections of the Broad Art Museum, Mint Museum of Art, The Detroit Institute of Art, Boca Raton Museum of Art, The Museum of the University of Iowa, Wayne State University and numerous private collections. His work has been featured in the Fort Wayne Museum of Art, Art Miami, Art L.A., the Robert Kidd Gallery in Birmingham and Timothy Yargers Fine Arts in Los Angeles. Recent publications include The Benneton Foundation's Imago Mundi PRoject, Manifest INDA 7, American Arts Quarterly, American Art Collector, Obsolete Magazine and Zen Monster. Shefman currently resides in West Bloomfirled and is the Chair of the Foundations Department at the College for Creative Studies. Schefman is represented locally by Robert Kidd Gallery. 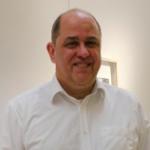 This exhibition features mixed-media paintings by Brian Elder, an artist and educator living in Mt. Pleasant, MI. His work explores the concept behind location, and how people place themselves in their surroundings. He received his B.F.A. from the University of New Hampshire, and his M.F.A. in Painting from Indiana University.