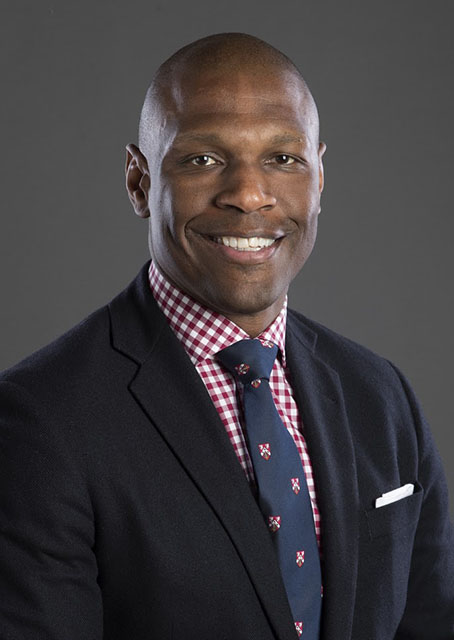 He is a distinguished graduate of the United States Air Force Academy and earned a doctorate in politics as a Rhodes Scholar from the University of Oxford. He also has an MBA with distinction from Harvard Business School, and in 2018 he received the school's Alumni Achievement Award. Dr. Howard's service to his country began as a helicopter pilot, then as an intelligence officer, where he was assigned to the elite Joint Special Operations Command. He served in
Afghanistan in the Air Force Reserve and was awarded the Bronze Star. He also served as the Reserve Air Attaché to Liberia.

Dr. Howard aims to make RMU the preferred strategic partner for corporations, organizations, professionals, and aspiring professionals in the Pittsburgh region and beyond. The university is nationally ranked by U.S. News & World Report and is now undertaking a $50 million capital project, the largest in its history, which will include the UPMC Events Center.

Before coming to RMU, Dr. Howard was President of Hampden -Sydney College in Virginia, and vice president for Leadership & Strategic Initiatives at the University of Oklahoma. Previously he worked in General Electric's Corporate Initiatives Group and Bristol-Myers Squibb’s Corporate Associates Program. Dr. Howard has served on the National Security Education Board, appointed by President Barack Obama, and the MyVA Advisory Committee for the U.S. Department of Veterans Affairs.

He is a member of the board of directors of the Allegheny Conference on Community Development and a member of the Council on Foreign Relations and the Young Presidents Phi, also known as the Boule, the oldest African-American fraternity in the United States Organization. He is a Henry Crown Fellow at the Aspen Institute and a member of Sigma Pi

Dr. Howard won the Campbell Trophy, the nation’s highest academic award for a senior college football player. He is a member of the Verizon Academic A
ll- American Hall of Fame and a winner of the NCAA Silver Anniversary Award. He also is a member of the National Football Foundation Awards Committee, the Knight Commission on Intercollegiate Athletics, and the College Football Playoff Selection Committee.

Dr. Howard is the founder and a trustee of the Impact Young Lives Foundation, a nonprofit organization that brings South African college students of color to the U.S. for summer educational and cultural tours. His wife, Barbara Noble Howard, is the foundation's executive director and a native of South Africa. The Howards have two sons, Cohen and Joshua.