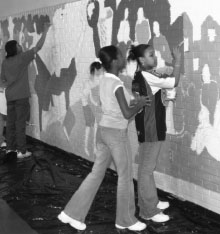 Title: "Expect Me to Do My Best"

The mural project is a culmination of a seven-week drawing and mural workshop in Fall 2002, which was funded by a Saginaw Community Foundation grant to the Marshall M. Fredericks Sculpture Museum on the campus of Saginaw Valley State University. A group of ten students, ages 10 to 17, from the Community Center came to the museum twice a week to study drawing technique with Professor Mosher. The students then assembled the mural sketch using imagery of interest to them and appropriate to the center.

The mural's imagery includes the sports and activities available at the Trinity St. John Community Center, including boxing, basketball, soccer, computers, and television. Tennis and golf are represented by Venus and Serena Williams, and Tiger Woods, respectively. Saginaw history includes the Goodridge brothers--the tri-cities' top photographers one hundred years ago. A central portrait of the late Mr. Hairston pays tribute to his many dedicated years of work at the center. Imagery of flying geese, a frog, and a rabbit were inspired by the animal sculptures by Marshall M. Fredericks that the students drew. A teenager is shown with a book in one hand and shooting a basketball with the other because the center requires that students complete their homework before playing.

"It was wonderful to see students drawing the museum's sculpture, then applying their skills to the mural," said Andrea Ondish, Director of Education at the Marshall M. Fredericks Sculpture Museum. Mike Mosher, who has painted mural projects with youth in San Francisco and Mountain View, California says, "The Trinity St. John students were some of the best I've ever worked with."