Lacresha Lincoln and teenage assistants from the Boys & Girls Club. 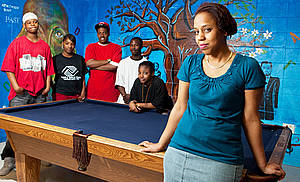 Monday, April 20, 2009  graduating SVSU senior Lacresha Goodwin Lincoln dedicated her new mural at the Boys & Girls Club at Longfellow Elementary School, 1314 Brown Street in Saginaw.  Brown Street is off Atwater, off Washington Street south of downtown.  To produce the new mural, she worked with youth at the Boys & Girls Club, generating imagery of women's growth and empowerment, youth motivation, community and Black history.  Lacresha was very active in the SVSU Winter 2008 Art 433: Community Mural class, which produced a painted mural in Trinity Center, and a digital mural for Saginaw High School.  In those murals, she worked with the teenagers from both locations.  Before coming to SVSU, Lacresha served as a Sergeant in the US Marine Corps.  Lacresha also exhibited along with other BFA graduates that month in the University Art Gallery.