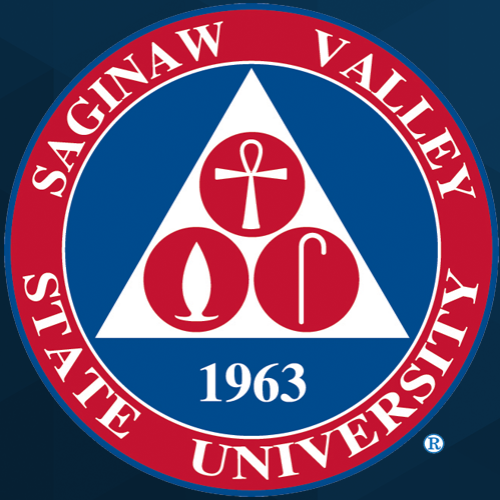 The Seal is shaped as a triangle that represents the geographical area formed by Bay City, Midland, and Saginaw, popularly known as the “The Golden Triangle.” Here three separate urban communities are merging into a metropolitan community with a population of more than 384,000. The college has been placed midway between the three cities to serve the need for a higher education institution.

Within the seal are symbols of Egyptian origin. The figure at the top stands for truth, and is associated with the teachings of Ikhnaton, who has been called “the first individual in history” and “the first monotheist.” His search for truth led him to enunciate elements of the scientific method and to a belief in the brotherhood of man.

The symbol at the lower left represents light – perhaps the inner light. Recognizing that “our knowledge is a torch of smoky pine that lights the pathway but one step ahead.” We may wish, in the words of Santayana, to:

“Bid, then, the tender light of faith to shine, By which alone the mortal heart is led, Unto the thinking of the thought divine.”

The symbol in the lower right is a staff that stands for strength. This may be regarded as an appeal for endurance necessary to search and find the truth, and then the strength to speak and live it.

The University has but a single color – cardinal – chosen, not because of its ornithological or it ecclesiastical significance but simply because it is a beautiful color.

Mary Kowaleski
Secretary to the Board of Control
makowale@svsu.edu
989-964-2597