Kristen Tomczyk knows a thing or two about developing strength.

As a career, she hopes one day to help others maintain their physical health and recover from injury. As a pre-physical therapy student, the experiences and opportunities available at SVSU helped her step closer to that dream.

“SVSU really honed my skills for me,” Kristen said. She graduated from the university in May and in June began her studies for a Doctorate of Physical Therapy at the University of Toledo. 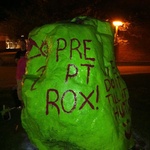 To say Kristen was active while at SVSU would be an understatement.  She was a Roberts Fellow (a leadership development program that includes a trip to Asia), a member of the women’s soccer team, the Student-Athlete Advisory Committee, the Athletic Training Club, and the Gender Equity Club. She was one of the founding officers of the Pre-Physical Therapy Club when it began in 2011.

The entire experience allowed her to advance to the next level — and thrive when she arrived.

“Joining the Athletic Training Club put me at an advantage as far as being more proficient and recognizing the anatomy of a body,” Kristen says.

“Being involved in soccer and all the other clubs helped me with my time management skills. Because of SVSU, it’s been a lot easier for me to handle everything and not feel overloaded.”

Douglas Eck echoes Kristen’s comments. The May 2013 graduate is pursuing a Doctorate of Physical Therapy at Virginia Commonwealth University.

“At SVSU, I was doing things way before I would have at other universities,” Douglas says. “Every single professor was interested in helping me toward that goal. If I had questions, I could go to any of them.”

When the Grand Rapids native arrived at SVSU in 2009, he was interested in its pre-physical therapy programs. When the 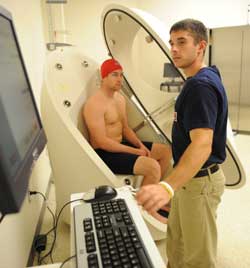 university’s Health and Human Sciences building opened in fall 2010, his interest — along with his educational opportunities — skyrocketed.

“There is so much high-tech stuff available now,” he says,

‌Douglas credits the SVSU equipment with raising his status as a candidate for graduate school.  The “BodPod,” which records an individual’s various health measurements, and a number of up-to-date computer programs are widely used in the field.

“We were learning on equipment that hospitals are using,” he said.

Douglas says he envisions one day returning to SVSU as an educator, helping support students’ endeavors in the same way his professors helped him.

In addition to Kristen and Douglas, below is a list of seven other recent graduates now seeking doctorate degrees in physical therapy: