Recess is over: Michigan's teaching job openings are on the rise — and SVSU is supplying the talent 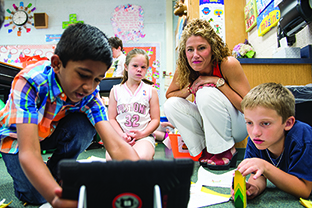 They say everyone loves a good comeback story.

And right now there’s a comeback tale playing out across the state that Craig Douglas is excited about.

Douglas, the dean of SVSU’s College of Education, said the demand for teaching jobs in Michigan is experiencing a stark rebound after years of decline. As a result, aspiring teachers who once faced an uncertain job market upon graduation now have plenty of options.

Recent data supports Douglas’ claim. According to Tom Barnikow, assistant director of Career Services at SVSU, 546 teaching openings were posted in 2012 to the Cardinal Career Network, an SVSU service that tracks job openings for students and alumni. Last year, that number swelled to 849 — a 35.6 percent increase — and there is reason to believe openings will continue to grow as seasoned teachers retire or take buyouts. Some estimate nearly one-third of the teaching jobs in the state will turn over in the next few years.

“SVSU has a very good reputation of producing high-level teachers,” Barnikow said. “But with this influx of jobs in the state of Michigan, when districts come to us, we just don’t have enough people to fill them all.”

William McDonald is familiar with this demand. The Saginaw High School graduate arrived at SVSU in 2010, when demand for teachers was at its lowest. After the elementary education major graduated with a bachelor’s degree in December 2015, he had eight job offers waiting for him. Those offers came without him ever putting in a single application.

“I’m so thankful to all the faculty and staff who were so supportive of me,” said McDonald, who accepted a job this year at the Saginaw-based K-8 charter school, Francis Reh Public School Academy.

“Having all those offers when I graduated was phenomenal and it just shows what an awesome program SVSU has. Hard work and dedication pay off.”

The resurgence of teaching jobs in Michigan was, in some ways, the result of a perfect storm, experts say.

In the early 2000s, as manufacturing jobs dried up and the state’s economy slowed, the population started to decline as people left the state. According to U.S. Census Bureau counts, Michigan lost nearly 55,000 citizens between 2000 and 2010, making it the only state in the nation to decline in size during that time.

With the decline in population came a lower demand for teaching jobs, as school enrollments dropped, districts downsized and many teachers were laid off to cut costs. “You can’t find a teaching job in Michigan” became an infamous warning cry and students elected to pursue fields outside of education.

Hiring outlook much different in early 2000

Jennifer Moeller remembered that dry spell for prospective teachers although, ultimately, she “was blessed” with a job offer within one year of earning a bachelor’s degree in education from SVSU in 2002.

“I was one of 100 applicants for some of these jobs,” she said. “In some cases, I was hand-delivering my résumés to try to get an interview. A lot of the students I graduated with, meanwhile, were leaving the state.”

Moeller was able to pay bills with the help of her husband’s salary while she waited for an opportunity locally. That opportunity arrived in 2003 when Saginaw Township Community Schools hired her. She remains there today, working as a kindergarten teacher at Hemmeter Elementary School.

“It’s very different now,” she said of the state’s K-12 job prospects. “We’re also seeing a huge need for qualified substitute teachers. When I was in school, it was hard to even find a job as a sub.”

A shift in the job market happened in the last 12 to 18 months when a stabilizing population coupled with veteran teachers stepping aside drove in-state demand to a level unmatched since the late 1990s, Douglas said. That demand is even greater given the aggressive ways other states recruit Michigan’s teaching graduates. Douglas and Barnikow said states such as Texas, Arizona and Alaska frequently recruit in Michigan, particularly at SVSU. Recent surveys indicated more than 95 percent of SVSU education graduates found full-time work or enrolled in graduate schools.

“If there is a candidate from SVSU, they do get a second look because school administrators know how much experience our graduates have,” Douglas said.

“Our program provides students with three times the amount of field experience other programs would provide, and when it comes to teaching, nothing beats experience.”

Douglas and Barnikow have now turned their attention to recruiting for the College of Education, where enrollment declined 55 percent in the last five years in part because of the earlier K-12 jobs dry spell. They’ve organized informational sessions, talked to parents at orientation and used social media to try to get the word out about the dire need for good teachers.

“The majority think the jobs aren’t there so parents tell students to go in different directions, away from teaching,” Barnikow said. “We’re trying to change the mindset from the last 10 years. There are teaching jobs in the state.”

Whether you are seeking teacher certification for the first time, renewing your certification or pursuing graduate work to take you to the next level, discover why over 11,600 teachers have chosen the nationally accredited programs at SVSU.