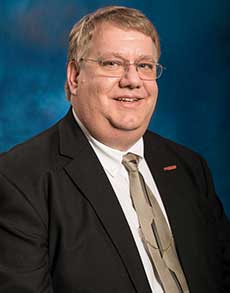 In 1988 Rick began working for General Motors Corporation as a project engineer in advanced development. He was appointed senior development engineer in Tokyo, where he served from 1992 to 1995. Rick then assumed engineering manager duties, first in the Asia Pacific region, then in Europe. In 2001, he was appointed global chief engineer, Steering Columns & I-Shafts. Since 2007, he has served as global product line executive director and chief engineer for Nexteer Automotive’s Steering Columns and Intermediate Shafts business.

A former SVSU Board of Fellows member, Rick received the Outstanding Alumni Award in 2003. He resides in Frankenmuth with his wife, Carol.