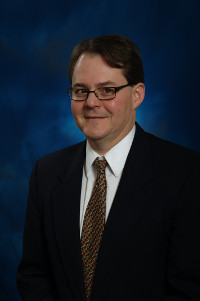 Teed joined the SVSU history faculty in 1997 and has devoted his career to the study, research, and teaching of history, specializing in the Civil War and Reconstruction and American religion and reform. He has authored two books, “A Revolutionary Conscience: Theodore Parker and Antebellum America,” and “John Quincy Adams: Yankee Nationalist.” A third volume, “Reconstruction: Guides to Historic Events in America,” co-authored with Melissa Teed, SVSU professor of history, is expected to be published later this year.

In addition, Paul Teed has written eight articles that have appeared in scholarly journals, 11 published book reviews, and more than a dozen papers that have been presented at academic conferences.

Teed has been widely recognized for his work as a scholar and teacher. In 2012, he received the Distinguished Professor of the Year award from the Presidents Council, State Universities of Michigan. In 2011, Teed was selected for the Ruth and Ted Braun Fellowship, which supports outstanding scholarly work by SVSU faculty and staff. He also received SVSU’s Landee Award for Excellence in Teaching in 2000.