We are the Cardinals of Saginaw Valley State University — learning outside of the classroom at 90 mph. Here, bright minds push their limits and teammates become family. Here, you'll rev your imagination to new heights. Here, you'll leave all expectations in the dust.

Learning Outside the Classroom

Originally published in the Fall 2014 issue of Reflections magazine.

One gray Wednesday evening in June, when members of the 2002 SVSU Cardinal Formula Racing Team reunited for this feature’s photo shoot, it was just like old times.

Most of the group had stayed in touch during the 12 years since that breakthrough performance season, but it was rare to see six of the 16 members assemble all at once in their old stomping grounds of Pioneer Hall.

A decade plus earlier, the same group spent day and night in this building, perfecting an Indy-style racing machine ranked that year among the best built by students from colleges across the world, including the elite technological institutions in America and the most celebrated automotive engineering talent developers overseas.

Their successors at SVSU continue to chase the standard this group set in 2002, when the group placed sixth in a global competition.

That’s their legacy, built from scratch in the scrap yards of hard work, determination and a camaraderie one team member labeled “legendary.”

“After spending as much as 36 [non-stop] hours working together, you tend to form solid bonds,” that teammate, Matthew Dissette, 2002, B.S., mechanical engineering, said. “Everyone on that team was determined to do well, and we all sacrificed our personal lives to do so. Guys lost girlfriends.”

It’s the story of what they won, though, that gets told with such pride to this day. 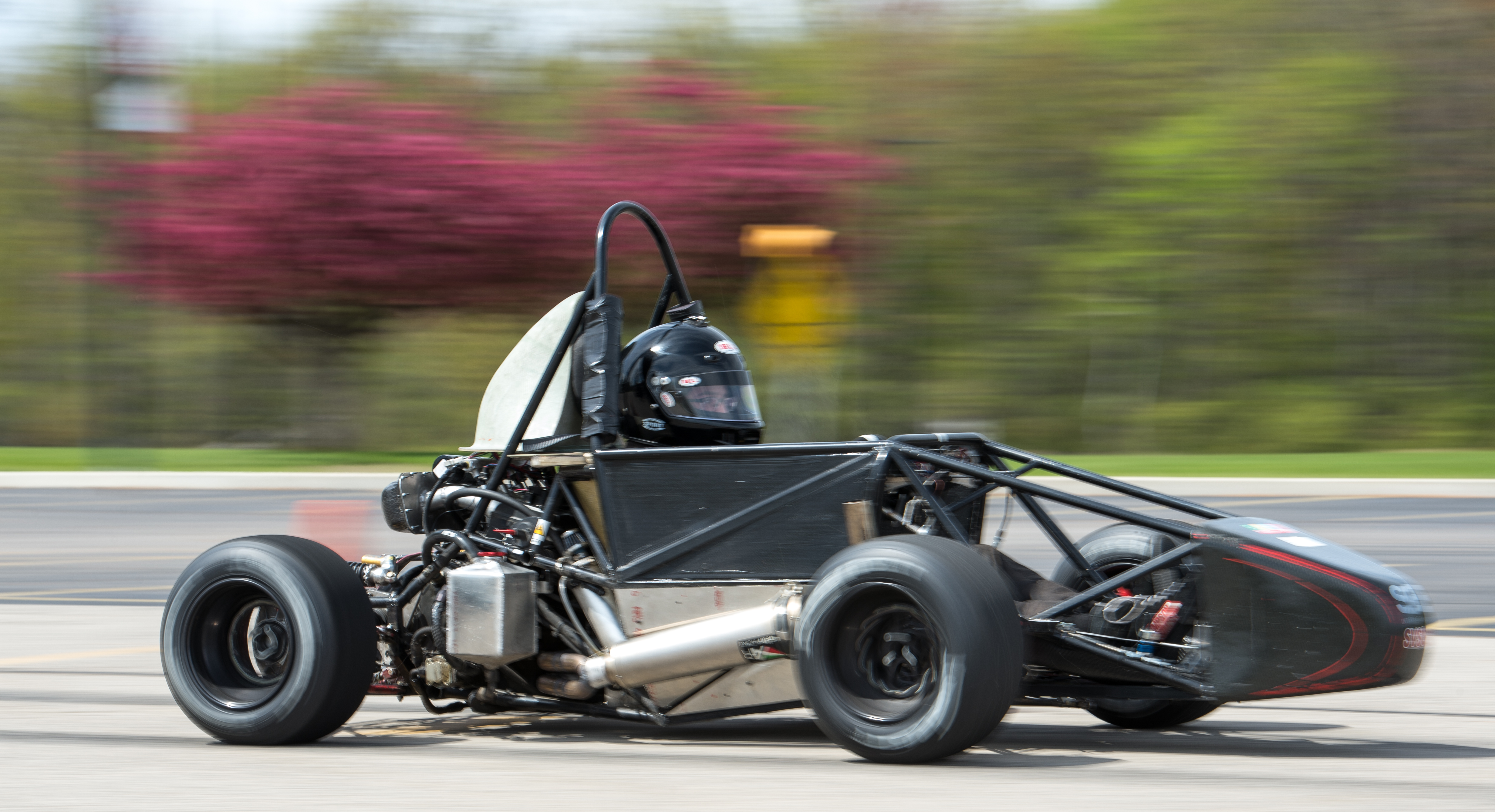 We perform our own racing tests in empty SVSU parking lots. 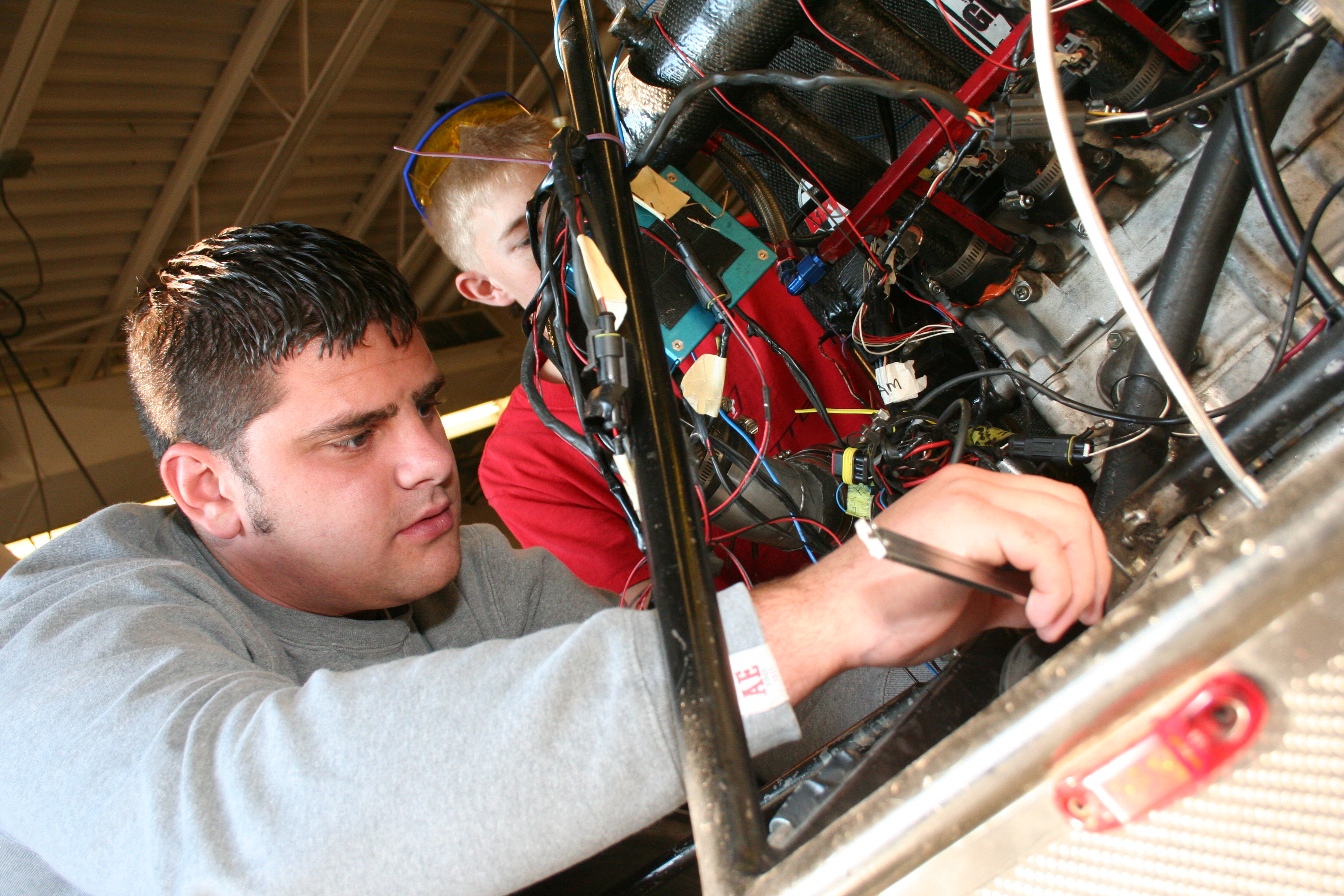 We receive every day, hands-on experience. 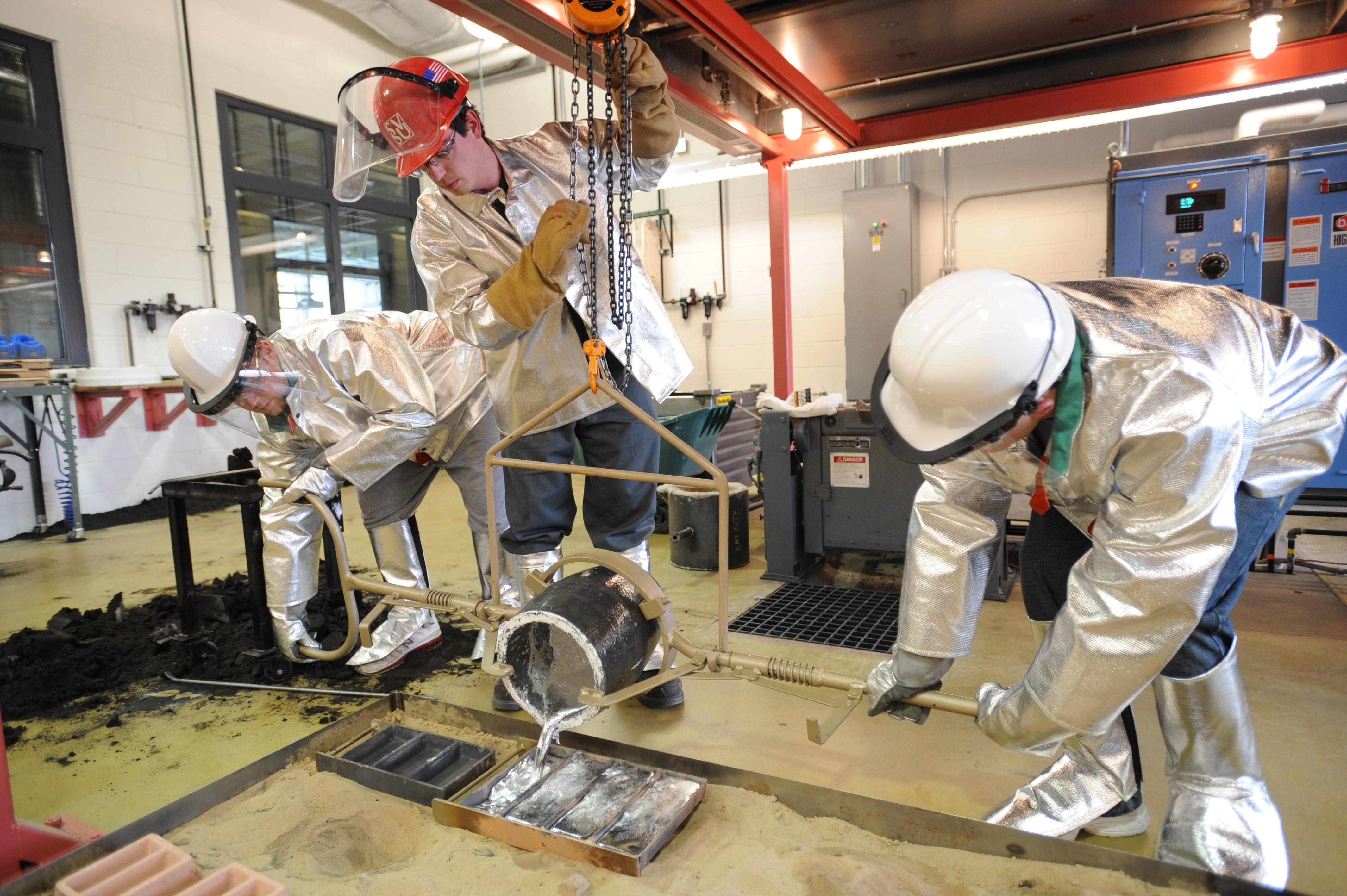 We believe in the importance of team collaboration from our initial step to our final finish. 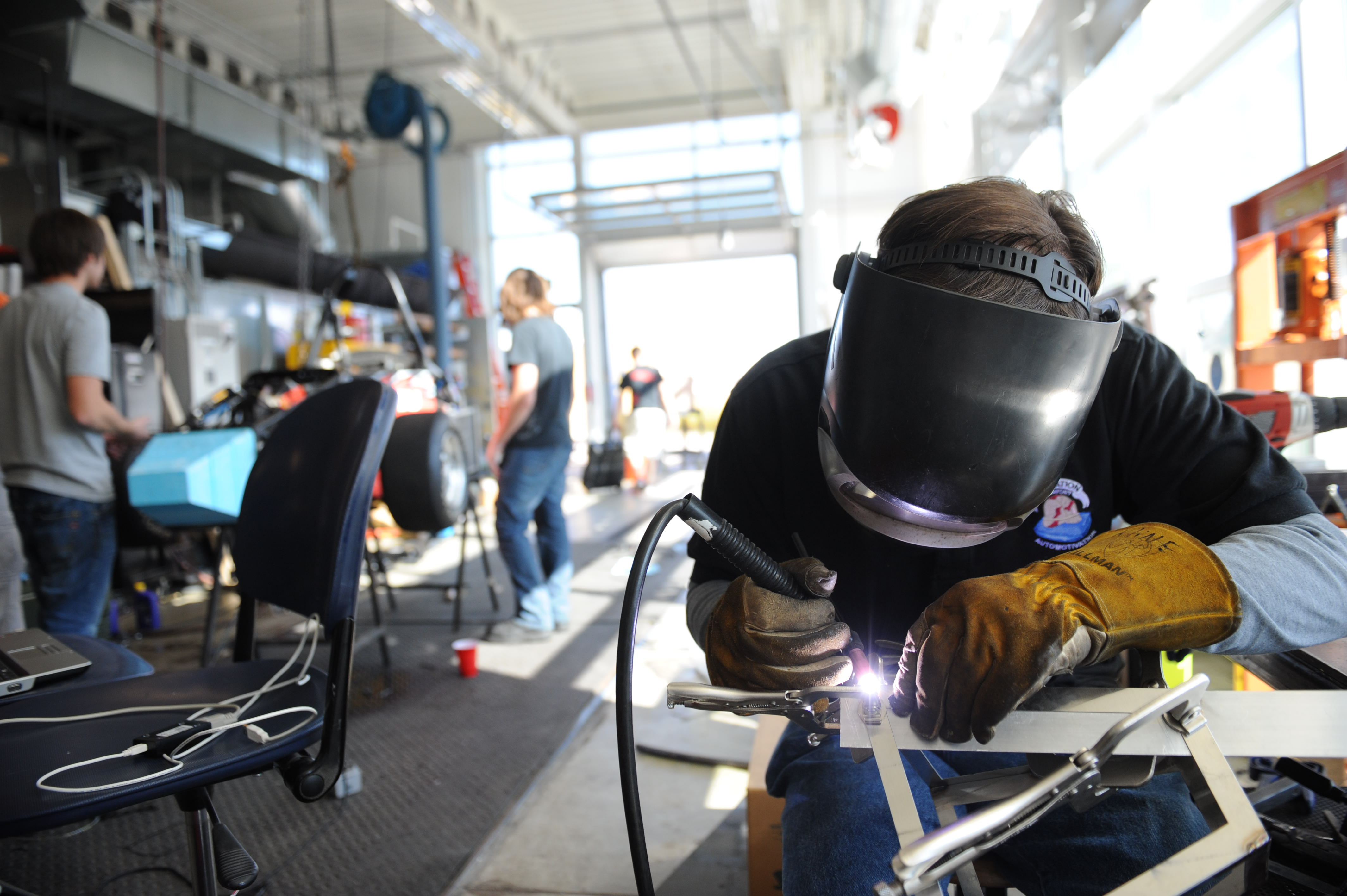 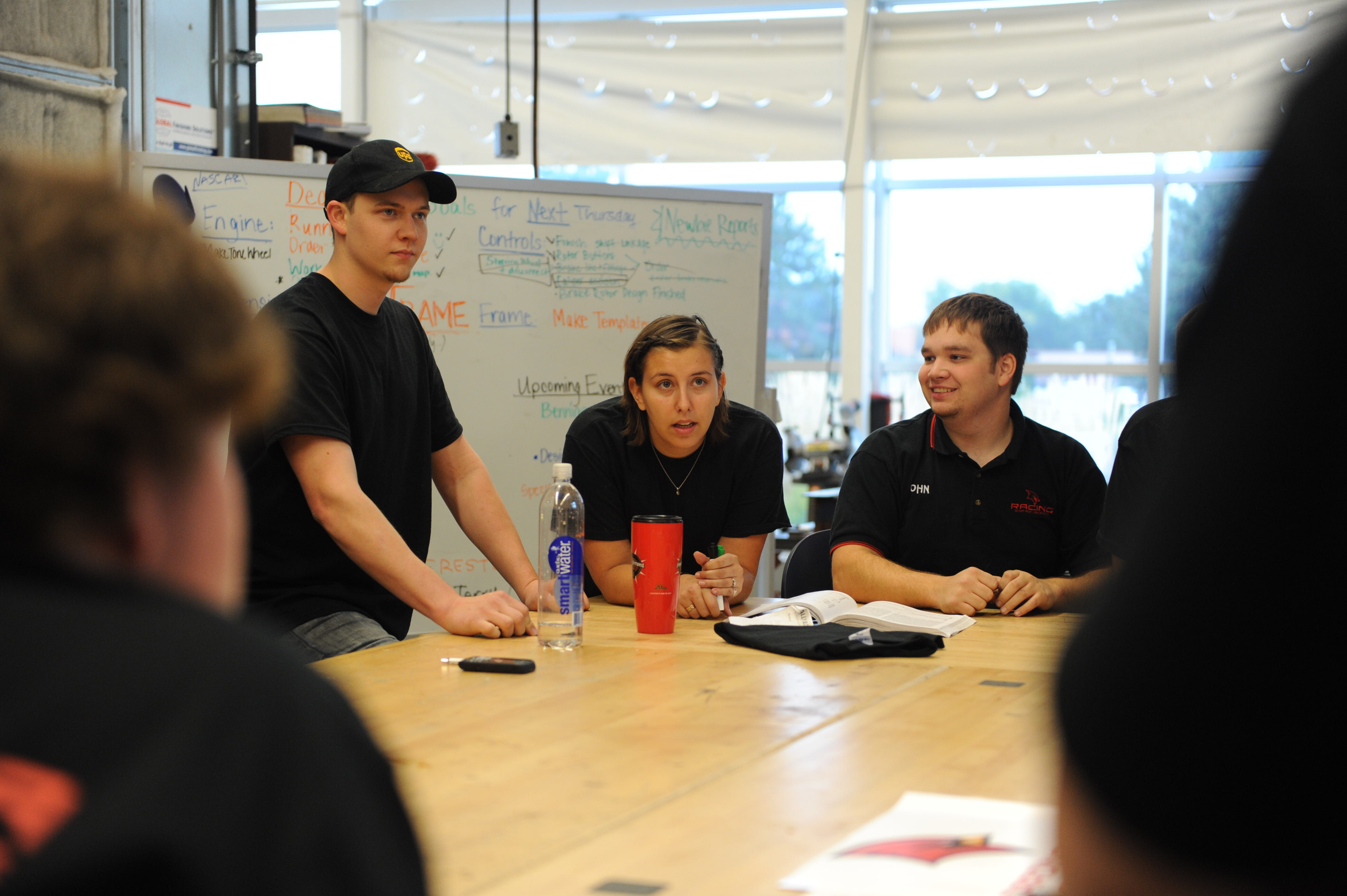 We work as a team at every stage of the formula racing process.

These days, SVSU Cardinal Formula Racing is an established brand on campus, an integral part of the mechanical engineering program since 1998.

Annually, there is anticipation and speculation about how well “this year’s group” will perform at the Formula Society of Automotive Engineers Collegiate Design Series (FSAE) competition in May, when 150 institutions attempt to out-build and out-perform each other’s cars.

Participating institutions include prestigious universities such as Cornell, Georgia Tech and Texas Tech, as well as schools in Germany, Brazil, South Korea and Austria. Some of those international programs feature students who set aside school for a year exclusively to build a vehicle.

In a nutshell, it’s tough competition.

SVSU competes with the best of them. The 2014 squad ranked No. 1 in the contest’s acceleration category and, despite experiencing electrical issues during another leg of the multi-pronged challenge, finished 36th overall.

It was the fifth-best finish ever for SVSU, the only institution with no graduate engineering students that placed in the competition’s top 10. And they’ve done that twice.

The school’s status has grown so high that the team’s faculty adviser, Brooks Byam, in 2013 was the recipient of the FSAE Carroll Smith Mentor’s Cup (given yearly to one outstanding faculty advisor).

In another nutshell, SVSU is tough competition. But that wasn’t the perception of Cardinal Formula Racing in 2002. “The first few years, we were scratching and clawing to get the thing together,” Byam said. “There was a real learning curve in the beginning.”

The race team was there in the beginning for Byam at SVSU — quite literally. On the day he interviewed for his faculty position at the university in May 1998, the inaugural Cardinal Formula Racing squad was loading its vehicle to travel for the FSAE contest. When Byam passed by the scene during his tour, he wasn’t certain he would be offered a position at the university, let alone that this fledgling race car design program would eventually catapult his career.

“We really grew up together,” Byam said of himself and the trio. “I relied on the students quite a bit because everything I was teaching was brand new [to me].”

By the time 2002 rolled around, those remaining from Byam’s original group were seniors whose three years of growing pains had matured into honed race car engineering experience. Meanwhile, the group’s newer members featured talent that rallied behind the leadership to contribute crucially to the crew.

Preparing for the FSAE is an effort that begins almost immediately after the previous competition ends in May. Those students expected to return to the team typically gather in June to discuss goals for the next design.

Dissette remembers the edict established during the meeting that set the stage for the 2002 FSAE.

“The 2001 team had a good car, but everyone knew it could’ve been much better,” the Washington Township resident said. “So that is what we set out to do.”

When SVSU resumed classes in August 2001, work commenced immediately on what became known as “The 84 Car,” the name given to the vehicle by FSAE because SVSU was the 84th team to register for the competition that year.

The 2002 team was distinctive on a number of levels that made them ready. Ready for tough competition.

First, its students were willing to work long hours. This “legend” resulted in several tales that have taken on almost mythical tones in the years since.

“They say that, one time, George [Coppens] never left Pioneer Hall for 72 straight hours,” Byam said of the team leader once known for storing all his groceries in the building’s lounge.

McClain has other stories.

“One particular all-nighter in the shop, I recall waking up in my welding gear at the welding table after having fallen asleep welding components for the car,” he said.

The Oxford resident also recalled once driving to Deussen’s house “to drag him out of bed and back to the shop to finish engine calibration. He had spent something like 36 hours straight at the shop before going home for some rest,” McClain said. “Understandably, he slept through his alarm, but we needed him.

“Unlike many of the larger universities, we had a very small team with limited resources available to us,” McClain said. “This meant a small core group of us really had to count on one another for a lot.”

The “brotherhood” — as he labeled it — formed back then still exists to this day. Many of them stay in touch. They have attended one another’s weddings. A few still work together.

Immediately after six of the 16 gathered in June 2014 for the reunion photo, they spent the rest of the evening catching up over dinner and drinks.

Perhaps “brotherhood” isn’t the most accurate term for the 2002 team, though. Another quality that distinguished the group was its co-ed composition.

One the 16 teammates was Lisa Mahoney, 2003, B.S., mechanical engineering.

“It’s very male dominated,” Byam said of the program. “Lisa is one of the few female engineers we’ve had on the team.”

Leadership also played a key role in the group’s success. Byam described both McClain and Coppens as “all business.”

The attitude and effort was about to pay of in May 2002 when the team arrived at the Pontiac Silverdome for the weekend-long FSAE competition.

“Many good things lined up that weekend. The team: we were a very cohesive group of people. The weather: good for racing and morale. The presenters: for the technical events, our team members knew their material and systems. The car: it was tuned and ready to race. And the drivers: they were spot on.”

Coppens was behind the wheel for parts of the competition.

“I remember my first run on the skid pad,” the Bay City resident said. “I finished it and the guys were telling me that I needed to push it harder on the second run because they couldn’t hear enough tire squealing. I pushed it as hard as I could.”

The team felt confident when the time came to announce the overall rankings.

“First, they announced the teams that didn’t finish in the top 10, and we all looked at each other,” Byam said. “With every team they called out, we were more and more excited.”

When SVSU Cardinal Formula Racing placed No. 6, McClain recalled the group was “completely ecstatic.” Coppens described the moment as “surreal.”

After the Dust Settled

A number of its designers presented the vehicle as their engineering program’s senior design project not long after the competition and, while testing its frame, the car snapped in half.

“In some ways, it was almost perfectly designed,” Byam said. “You build the perfect vehicle so it just crosses the finish line. That’s what it did.”

The car’s legacy, though, hasn’t come to a stop. Its momentum transferred to the students who designed it, to the professor who advised them and to the university engineering program they all represented.

Several members of the 2002 team say their participation that year solidified career trajectories.

Some of those teammates work today as successful professionals in the engineering field. Both McClain and Dissette work for Auburn Hills-based tier I automotive supplier Continental; Bauman at Saginaw-based advanced manufacturing company SWS-Trimac Inc; and Coppens at Saginaw-based automotive manufacturer Means Industries.

“The FSAE experience did help shape my life; there is no doubt,” Coppens said. “Before I joined, I was partying a lot, I was not applying myself and I was not focused enough on my engineering studies. After I joined, there was a sense of competition within me that drove me to get better grades than my teammates.”

As for the team’s mentor, when the team placed sixth, Byam said it was “the highlight of my career. It established me nationally and boosted the reputation of our program, which were two of my goals.”

The performance at the 2002 FSAE also heralded the Cardinal Formula Racing program’s arrival. It was a message heard by prospective engineers such as Phil Degner, a Baltimore, Md., resident who enrolled at SVSU in 2003 after seeing the team’s results from the prior year. He graduated in 2005 with a B.S. in engineering technology management. These days, he’s an engineer for a NASCAR team in North Carolina, along with 2002-05 Cardinal Formula Racing crew member Allen Hart, 2005, B.S., mechanical engineering.

Both Degner and Hart also were part of the SVSU race team that earned the second-best FSAE finish ever — eighth place — in 2005.

“Once we did that, it was a blessing and a curse,” Byam said. “I thought we should be in the top 10 every year.” His teams haven’t broken through the top 10 since.

They came closest in 2008 with a 14th-place finish. “The competition is so stiff,” Byam said. “You can do 99.9 percent of everything right and one thing can go wrong.”

Byam, for instance, considers the 2007 Cardinal Formula Racing team’s car the program’s fastest vehicle — even faster than “84.” But the machine didn’t complete its endurance test and the team placed 37th overall.

While SVSU’s program regularly bests many of those crews competing at the FSAE, Byam gives a definitive answer when asked to rank the best of his own teams.

Steps to Join the Team

Talk to prior team members or chat with an advisor.

Go to an Official Meeting

Learn all about the who, what, where, when, and whys of the Cardinal Formula Racing team.

Meet With an Advisor

Don't be afraid to ask questions about the team and what your expectations should be going into it.

Welcome to the Racing Family!

Take a leap of faith and join the team!