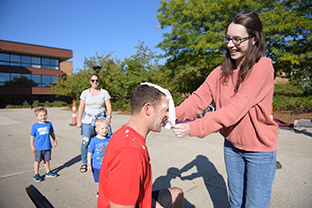 The persevering spirit of Saginaw Valley State University students will improve the lives of young people in the Great Lakes Bay Region, as SVSU students insisted on continuing a fundraising tradition, resulting in a donation of at least $20,302 for a Midland-based nonprofit.

The total was raised during SVSU’s “Battle of the Valley” week-long fundraiser from Oct. 6-11, benefiting The ROCK Center for Youth Development, an organization that provides after-school programs and development initiatives for teenagers across the region.

The fundraiser nearly didn’t happen. Formerly known as “Battle of the Valleys,” the tradition from 2003 to 2018 involved students from SVSU and Grand Valley State University competing to raise the most amount of money for their respective nonprofit beneficiaries. GVSU students backed out of the event this year. But SVSU student leaders rallied to save the tradition, re-imagining it as a fundraising campaign organized exclusively at SVSU.

Nora Lipetzky, one of the student leaders involved in creating “Battle of the Valley” this year, said the $20,302 raised was a success — especially considering there were some who were skeptical the fundraiser would find much success without the added motivation of a competing university.

“We’re ecstatic and elated that we raised so much for such a deserving nonprofit,” said Lipetzky, a native of Palos Heights, Illinois who earned a bachelor's degree in political science in May and is pursuing a master's degree in public administration.

Kylie Anderson, The ROCK Center for Youth Development’s director of development, said she was “thrilled” when she learned about the total funds raised.

“We know it was a new venture — with the solo ‘Battle of the Valley’ — and it was great to see the students and the SVSU community do such an amazing job, rallying together like that. We are very grateful.”

Anderson was able to attend some of the activities organized as part of the week-long fundraiser. Those events included sponsored gatherings at nearby businesses — including Buffalo Wild Wings and Stardust Lanes — as well as on-campus events that allowed participants to contribute funds in exchange for petting puppies, throwing pies at professors and smashing a car with a bat.

“It was awesome to see all of that going on,” she said. “I loved the creativity.”

Representatives from The ROCK Center for Youth Development plan to accept a ceremonial check during SVSU’s next home football game scheduled Saturday, Nov. 2 at 1 p.m. SVSU students continue to sell the remaining inventory of T-shirts and sweatshirts, so the final fundraising total is likely to increase.

Meanwhile, SVSU student leaders already are planning next year’s “Battle.” Lipetzky said they hope to recruit another university — replacing GVSU — to insert a competitive element back into the tradition for 2020.

Lipetzky said SVSU’s student government, known as Student Association, already has begun reaching out to gauge the interest of some peer institutions. A decision could be announced by the end of the year, she said.

“We want ‘Battle of the Valley’ to remain a quality philanthropic event,” Lipetzky said, “so we hope to find a compatible match that will ensure that.”