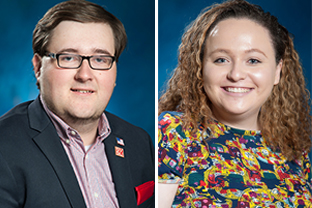 Newly-elected leaders of Saginaw Valley State University's student government promise to continue a fundraising competition that has raised more than a half-million dollars for nonprofits and charities statewide.

Since 2003, students with SVSU and Grand Valley State University have engaged to in a charitable fundraising competition during the annual Battle of the Valleys, a week-long fundraiser that concludes when the institutions' rival football teams play in the fall. In March, though, GVSU's student government voted to withdraw from the competition, leaving the contest's future in question.

But representatives with SVSU's student government — the SVSU Student Association — have announced plans to reconfigure and continue the event on their own.

Members of the outgoing and incoming leadership drafted and signed a public letter of statement that pledges to move forward to identify a charity partner to benefit from a fundraiser this year.

One of those signatures belonged to Hunter Koch, the recently-elected Student Association president who will take office in a few weeks. The St. Charles native studying for a master's degree in public administration said the annual fundraiser was too important to let slip away for SVSU's community-engaged students.

“Student Association found it critical that we maintain our commitment to SVSU and the region because we have always placed an emphasis on philanthropic endeavors, supporting our community and local non-profits, and showcasing that SVSU truly has twice the heart,” said Koch, who received a bachelor's degree in political science from SVSU in 2018.

He said details on the reconfigured event — tentatively titled “Battle of the Valley” — will begin to take shape when the Student Association appoints leadership for the fundraising effort at an April 22 meeting.

One detail that seems certain: This year's funds will be raised exclusively by SVSU's community because it's unlikely a substitute for GVSU could be identified in time for the fall event, Koch said. That could change for the 2020-21 academic year.

“While we would like to have found a new university for the 2019-20 school year, it is not feasible to find a new university to partner with and negotiate an extensive contract with them that would prevent abrupt withdrawals in the future,” he said.

“While this year will focus on SVSU students and alumni exclusively raising funds for a deserving not-for-profit, it is our hope throughout the next academic year to reach out to different universities with similar demographics to SVSU in order to find a phenomenal new partner and competitor for fall 2020.”

In the meantime, Koch and his Student Association leadership say they anticipate support for the fundraiser will grow. Nora Lipetzky, the recently-elected speaker of the Student Association, said she hopes the April 9 statement letter signed by two generations of student leaders will immediately begin to generate excitement among SVSU students.

“Current Cardinals — as well as our fantastic alumni — have expressed such eagerness and excitement for what the future holds for Battle of the Valley at SVSU,” said the political science major from Palos Heights, Illinois.

“Philanthropic work is important to us, especially with local non-profits. It is our hope that Battle of the Valley this year will be bigger and better than ever.”

SVSU students raised $36,210 or the Barb Smith Suicide Resource and Response Network during the Battle of the Valleys fundraising competition in October 2018. Between SVSU and GVSU, the universities raised a combined total of $652,385 since Battle of the Valleys started in 2003. SVSU contributed $425,657 of that total.