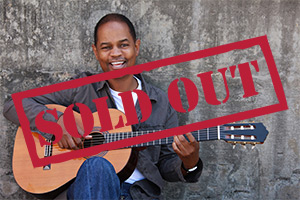 Described by the New York Times as “a guitarist with impeccable technique,” Klugh has enjoyed a decorated career that includes his latest album, “HandPicked,” which debuted at No. 1 on Billboard’s Contemporary Jazz Albums chart following its release in 2013.  The disc features 13 solo tracks, and three duets with very different musicians: famed jazz guitarist Bill Frisell; ukulele master Jake Shimabukuro; and Country Music Hall of Fame guitarist and singer Vince Gill.

Since Klugh released his inaugural album in 1976, he has landed on Billboard’s top-10 list of jazz albums 24 times; six of these topped the charts.  His recordings have received 13 Grammy nominations (“HandPicked” being the latest), and his collaboration with pianist Bob James, “One on One,” received a Grammy for Best Pop Instrumental Album in 1980. Over the course of his distinguished career, Klugh has performed with legendary musicians, including Gerald Albright,
George Benson, George Duke, Roberta Flack, Al Jarreau, Ray Parker Jr., Lionel Richie, and Stevie Wonder.

A native of Detroit, Klugh’s tour schedule this year has taken him from Japan to California to the famous Blue Note club in New York City.  His visit to SVSU marks his first concert performance in the Great Lakes Bay Region.

Tickets are $35 for the main floor and $30 for the balcony; student tickets are available for $10. All tickets can be purchased through the SVSU Box Office, available online at www.svsu.edu/boxoffice or by phone at 989-964-4261.  NEW - Special hotel rates now available for out-of-town concert attendees.