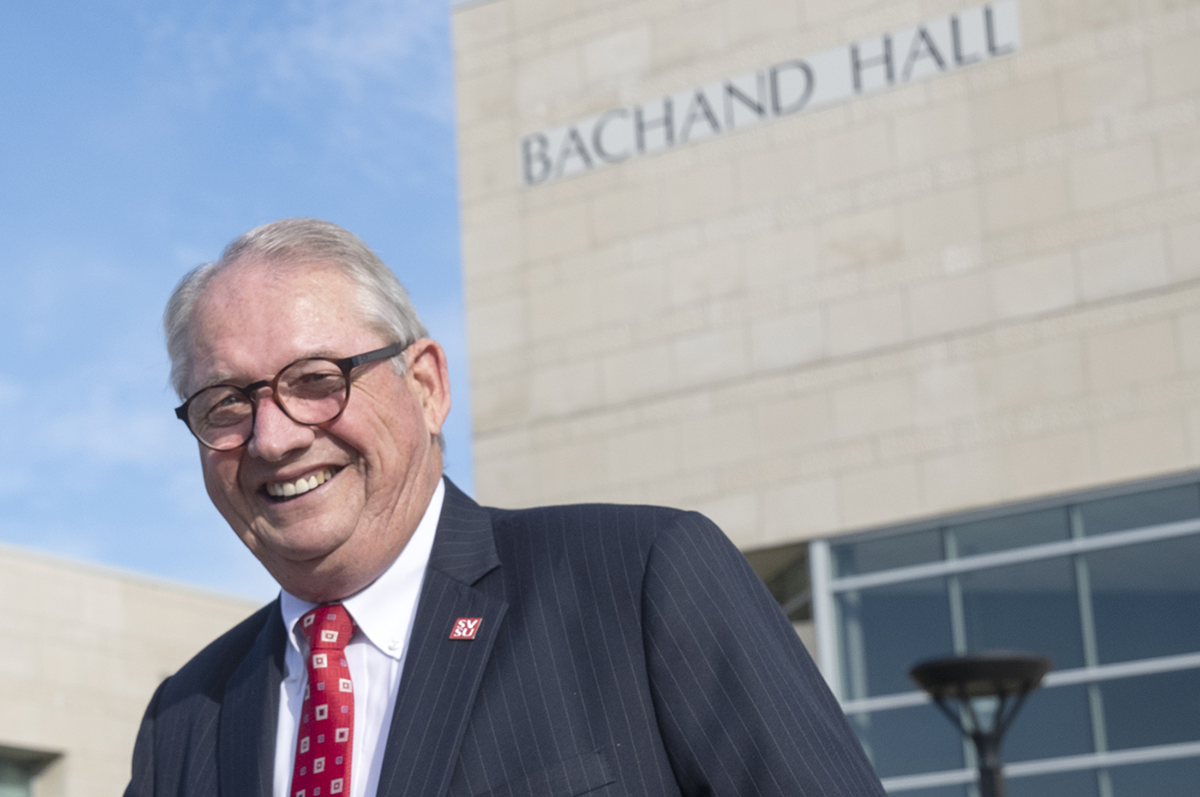 Donald J. Bachand, has demonstrated a longstanding commitment to education, the university, and health and wellbeing throughout his tenure at Saginaw Valley State University, include more than 8 years of service as SVSU’s 4th president.

To honor his service, the Health and Human Services Building at SVSU was formally renamed Bachand Hall during a 10 a.m. ceremony today, Monday, Oct. 3. The ceremony took place outdoors near the building on SVSU’s campus and was also delivered via livestream.

“Don Bachand’s history at SVSU is a history of service,” said Rajkumari Wiener, vice chair of the Board of Control and an SVSU graduate, during her remarks. “His 44 years at this institution make up almost three-quarters of the university’s total history.”

A former police officer in Detroit, Bachand joined SVSU in July 1978, helping found the criminal justice program. He advanced in his career, serving as dean of the College of Arts and Behavioral Sciences, vice president for Academic Affairs, and provost before being named president in February 2014.

“As president, Dr. Bachand built on a strong tradition of service and set a very high personal example of dedication to the institution,” Wiener said. “He doubled the number of private scholarships, oversaw successful fundraising and lobbying efforts, established new degree programs, and earned prestigious national awards for the university. But above all, he led the institution during a period of unprecedented challenge. His steadfast leadership during the COVID-19 public health crisis has shown us that Don Bachand was the right president at the right moment in the institution’s history.”

SVSU’s Board of Control approved the building renaming in June. In November 2021, Bachand announced his intent to retire from the university effective December 31 of this year, capping nearly 45 years of dedication.

As a first-generation college student himself, Bachand has a keen understanding of the challenges facing many SVSU students, and he has worked to increase opportunity for them. In April 2021, SVSU announced the largest private gift to the university — $6 million from Robert and Ellen Thompson to establish the Thompson Working Families Scholarship.

Ron Bacon, mayor of East Lansing and one of Bachand’s former students, credits Bachand with preparing him to succeed.

“One of the chief cornerstones of my journey has been Dr. Bachand,” Bacon said. “As my professor in the criminal justice program, he taught me critical thinking skills and how to separate the academic from the practical. I learned what you need to know for the test, but to be great, you had to carry those values from lessons into your life. Dr. Bachand and I had many conversations on justice, equality and equity well before those became current topics shaping today's political and social landscape.”

“He likes to greet as many students as possible,” Barba said. “It is common to hear him ask, ‘What’s your name? What’s your major? Where are you from?’”

Barba said Bachand’s dedication to students extended to her in her role as an employee in his office.

“President Bachand not only served as an inspiration, but he opened doors for me,” Barba said. “I was able to explore and connect with so many individuals that many students don’t typically get to. Working with so many different departments, experiencing things that only administrative staff get to experience, as a student this was not only exciting, but it allowed me to grow personally and professionally.”

As a long-serving faculty member and administrator, President Bachand emphasized a healthy and effective workplace, leading to SVSU receiving national recognition as a “Great College to Work For” for six consecutive years.

In addition to Bacon and Barba, two other SVSU graduates offered remarks: Patrick McInnis, former CEO of Fathead LLC and a former student of Bachand’s, and Imran Khan, who worked with Bachand on a variety of initiatives to serve SVSU’s international students. Bachand’s daughter, Melissa Harper, also offered her perspective, preceding her father at the lectern. Vicki Rupp, chair of the Board of Control, served as master of ceremonies.

Bachand will be succeeded by George Grant, who was selected as SVSU’s 5th president, in August. Grant will take office on Jan. 1, 2023.