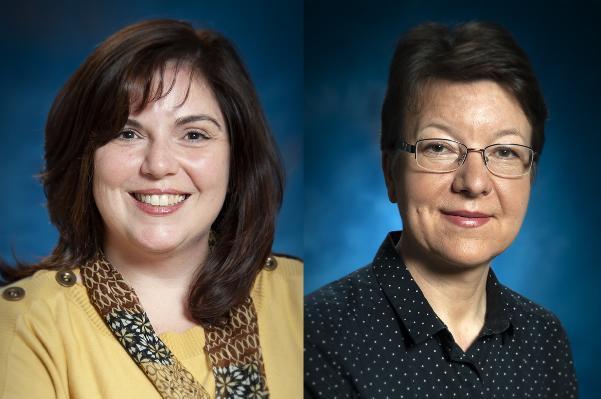 Frances will better understand the preservation and use of literature by building upon her prior study of outsider libraries with a particular emphasis on “trash libraries,” collections of books literally pulled from the trash.

Knoblock will expand her research on the linguistics and language used in current American politics to examine political discourse among conservatives.

Each will receive research support grants totaling up to $37,500 over the next three years to further their scholarly and professional activities. Funds may be used for research expenses, equipment, travel and/or other related support.

Frances intends to ultimately author a book that explores how "trash libraries" can impact a community's perception of libraries and how they might impact literacy rates within certain demographics. She will take a deep look at when and how books or book collections are regarded as objects, as opposed to being regarded for the content inside.

As a scholar, Frances previously authored the book “Libraries amid Protest: Books, Organizing, and Global Activism,” which was published in 2020. It examines how Occupy Wall Street activists took over Zuccotti Park in New York City and within weeks, the encampment included a library of several thousand physical books, among other things. She also received an SVSU Faculty Research Grant in 2020 for her project, “Trash Libraries and Public Literacy.”

Frances joined the SVSU English faculty in 2011. She completed a master’s degree and Ph.D. at the European Graduate School in Switzerland after earning a bachelor’s degree from Southwestern University in Texas. During her time at SVSU, Frances has an impressive research record, having written several scholarly publications and given more than 15 academic conference presentations or invited talks.

Knoblock has examined public and political discourse in multiple cultures and contexts. She served as the editor of the anthology, “Language of Conflict: Discourses of the Ukrainian Crisis,” which was published in 2020. Her study of Russian news coverage of Great Britain’s departure from the European Union, commonly known as “Brexit,” was published in the academic journal “Critical Approaches to Discourse Analysis across Disciplines.”

In her upcoming research, Knoblock will explore if the language used by modern American conservatives matches the preference of a public that has abandoned the expectation of accuracy and eloquence and instead desires simplicity and entertainment. Her analysis will examine the claim that the speech of former President Trump – characterized by limited vocabulary, fragmented syntax, and other features – is representative of the preferences of the population in the conservative part of the political spectrum.

Knoblock joined the SVSU English faculty in 2012. She completed her Ph.D. at Tambov State University in Russia. Her extensive scholarly record includes more than 12 published articles or books and at least 10 scholarly presentations since 2016.

Established in 2005, the Braun Fellowship program was created through a $1.5 million endowment from the Saginaw-based Harvey Randall Wickes Foundation. Administered by the Saginaw Community Foundation, the program's purpose is to recognize the exceptional accomplishments and potential of select SVSU faculty and staff. It is named in honor of Ruth Braun and her late husband, Ted.