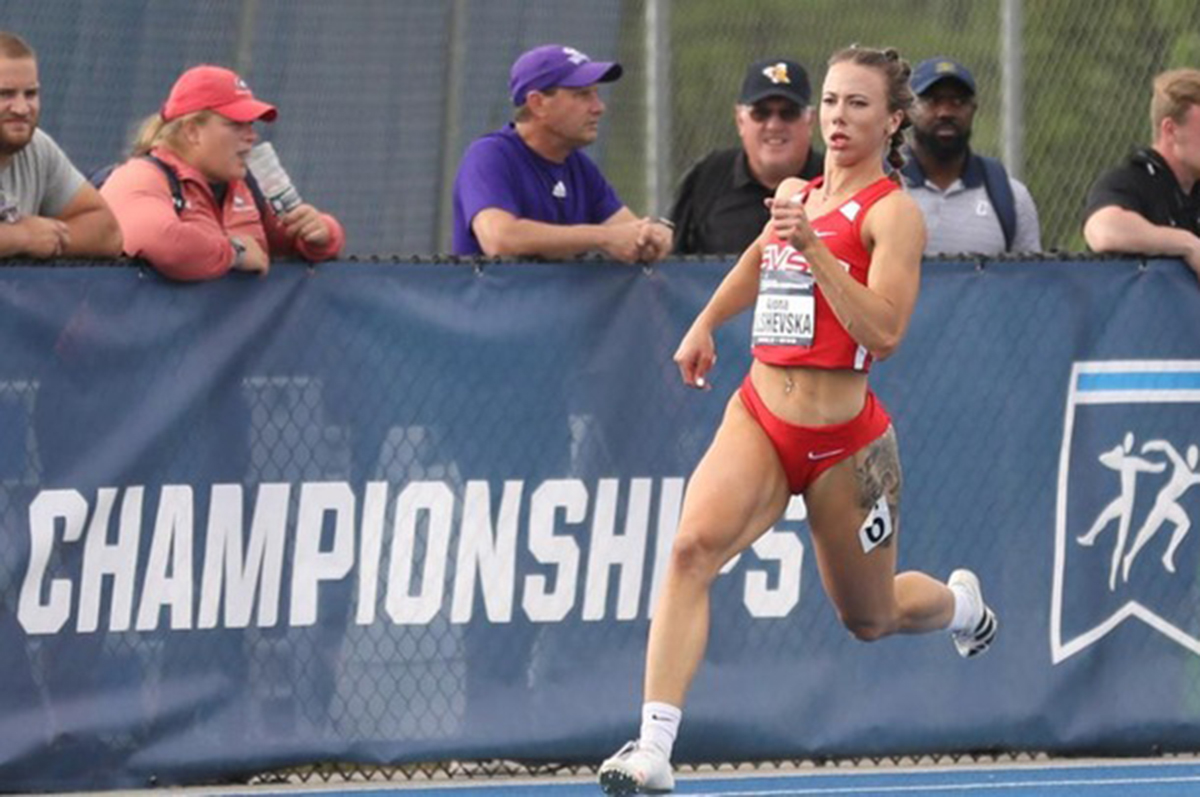 Saginaw Valley State University student and women's track and field All-American Alona Olshevska knows what it takes to run fast, but when confronted with uncertainty and fear with family still living in her native Ukraine, there was no running away.

Instead, Alona kept running, winning races and garnering awards. Most recently, Alona was named a CoSIDA Academic All-American for the first time in her career and after the end of the season, Alona was also honored with spring 2022 GLIAC Commissioner's Award.

A Show of Support

In early March, just a few weeks after Russia invaded Ukraine, several SVSU Cardinals participated in the NCAA D2 National Track & Field championships. Among them was Alona, a senior criminal justice major and native of Ukraine. Alona came to the United States with her father when she was 14 and graduated from John Glenn High School in Westland, Michigan. Her mother, grandparents and the rest of her family still live in Ukraine. 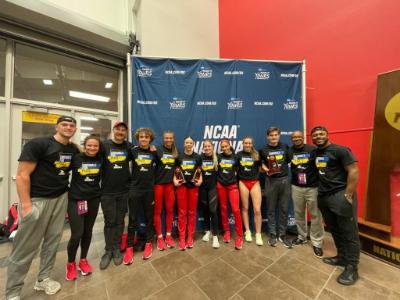 In the days leading up to the championships, Alona knew she wanted to show her support for her home country, but she was having a hard time deciding what to do. Her Cardinal community gathered together to partner with the Office of University Communications to design a t-shirt to be printed for all participants and coaches traveling to the national championships.

“I just knew that at some point I will want to demonstrate my pride and support for my people back home,” commented Alona. “My coaches were a few steps ahead of me, so they made those (shirts) for the whole team who traveled to Nationals, which I appreciated more than words can describe. I was so happy and proud to be able to represent not just the SVSU but also my dear home, Ukraine.”

“I believe that there should be peace all over the world and as humans, we should help each other as much as we can since avoiding war is, unfortunately, not an option at this moment. I was born and raised in Ukraine, and most of my family has been affected by the events that took place there. Consequently, it is in my greatest interest to be able to help the people of Ukraine, my people.”

Alona graduated in May and will continue her education at SVSU pursuing a graduate degree in Public Administration and completing her final year of track and field eligibility. Throughout her time at SVSU, her university community has helped Alona meet challenges head-on.

“Many of my teammates, coaches and professors have been very understanding and supportive of the current situation and that helped a lot with all of the stress and anxiety,” she added when asked about how she was handling everything. “The SVSU community as a whole has been showing a lot of sympathy for me and Ukraine, which I will always remember and appreciate.”

While at SVSU, Alona dedicated most of her time to maintaining a high grade point average to remain on the dean’s list. A lot of her focus was also directed to track and field program, through which she was able to attain many All-GLIAC (Great Lakes Intercollegiate Athletic Conference) titles, set four SVSU program records and earn a career total of seven NCAA DII All-American awards. 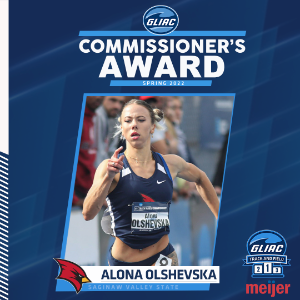 At the NCAA track and field championships, Alona was able to set aside the stress and focus on her performance, earning All-American honors in the 400-meter run (4th place) and the 200-meter dash (7th place), as well as being part of the 13th place women’s 4x400-meter relay team.

For the outdoor track season, she was named the GLIAC’s Women's Track Athlete of the Year, winning the 400-meter dash, placing as runner-up in the 200-meter dash and running as part of the winning 4x100-meter relay. Alona qualified to compete in the NCAA D2 outdoor championships held May 26-28 in Allendale, Michigan, competing in both the 200-meter and 400-meter dashes.

In addition to competing at a high level in track and field, Alona has participated in several sports competitively including soccer, basketball, volleyball, gymnastics, dance and cheer. As a youth in Ukraine, she competed in rhythmic gymnastics for several years and while at SVSU she has been able to combine her passion for gymnastics and youth athletics through service at Mid Michigan Gymnastics USA in Freeland.