Three champions for diversity, understanding and support of underserved people in the Great Lakes Bay Region have been selected to receive the Martin Luther King, Jr. Drum Major for Community Service Award. The award honors people in the Great Lakes Bay Region who perform everyday acts of service with reliability and commitment, but who seldom receive recognition and whose work exemplifies one or more of Dr. King’s values or beliefs.

The three leaders, representing Bay, Midland and Saginaw counties, will be recognized during the Martin Luther King Jr. Regional Celebration, which will be held virtually Wednesday, Jan. 19 at 7 p.m. Dr. Condoleezza Rice, 66th Secretary of State, will be the featured guest in a moderated fireside chat.

The 2022 Drum Major Award honorees are Waheed Akbar, M.D. (Saginaw County), Darold Newton (Bay County) and Erin Patrice (Midland County). They will receive a $1,000 award for a charitable organization of their choice.

Dr. Akbar is an orthopedic surgeon with Ascension Medical Group and has been a dedicated community volunteer, serving on boards of directors for a number of organizations, including Ascension St. Mary’s, the Saginaw Valley State University Foundation and the Saginaw Branch of the NAACP. He established the Dr. Raana Akbar Memorial Lecture on Islam and Culture at SVSU in memory of his wife, and he is active in Interfaith Saginaw. 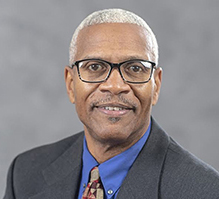 Newton is the TV host and producer for Delta College Public Media’s “Soul Issue: The African American Perspective.” He also serves as president of the NAACP Bay City Branch, a role he has filled since 2011. Newton has worked to address civil rights and social justice issues for all people in Bay County and the Great Lakes Bay Region, including working with community partners on projects such as the 2020 Census; Black Lives Matter policing issues; and diversity, equity, and inclusion strategies in the K-12 system.

Newton said his goal is to “encourage all of us to be prepared to answer the call to lead your own band when the baton is passed to you. Similar to our model, Dr. King, do it for the cause, not the applause!”

He continued, “I am deeply honored and humbled by the award and encourage everyone, especially the young MLK scholarship recipients, to get engaged and stay engaged in all things local, from the school board to local government positions, because all politics start local and have a direct impact on the community in which we live.”

Patrice is the creator and host of The Breaking Bread Village in Midland, a space where people can engage in conversations aimed at creating positive change. She is an active community volunteer, serving on the Midland County Housing Commission and the Midland Area Cultural Awareness Coalition. She also sits on several boards that allow her to advocate for seniors and children.

Patrice said she was humbled to receive this award.

“I appreciate the nomination and recognition and promise to keep working to make dreams of unity a reality,” she said. “Often you do things just because it’s the right thing or you feel you are led to do it, and honestly, you don’t even think people notice.”

The Martin Luther King Jr. Regional Celebration will be presented virtually by SVSU. For more information, or to receive the link to the fully online program, visit: svsu.edu/mlk/.