A former Saginaw Valley State University track standout was named to the NCAA’s 2022 Today’s Top 10 list. Lauren Huebner, a two-time graduate of SVSU, was recognized along with nine other recipients at an honors celebration on Wednesday, Jan. 19, during the NCAA Convention in Indianapolis. 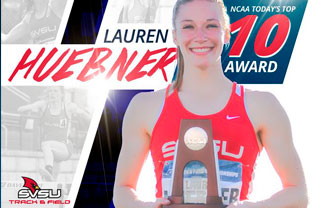 The award recognizes former student-athletes for success in the classroom, competition and community. Huebner, a Saginaw native, is the first SVSU student-athlete to be named an NCAA Today's Top-10 Award winner.

Huebner was be joined at the honors celebration by her family, as well as several SVSU staff members who supported her in her career. Rod Cowan, SVSU head coach for track and field, coached Huebner throughout her SVSU athletic career; he will present the award to her.

Huebner graduated with a Bachelor of Science in rehabilitation medicine in May 2020 and a Master of Science in occupational therapy in December 2021. She is preparing for her certification and licensing exams in the near future.

When she was exploring colleges, Huebner knew she was interested in the health care field, especially occupational therapy. After looking into SVSU’s accelerated degree program for occupational therapy, receiving an offer to run track at SVSU and touring campus, she knew the university would be a perfect fit.

“I came to tour campus and I fell in love with it for the first time. I saw all the beautiful buildings and housing and food and everything...I think it just was a perfect match for me from the start” she said.

In a long and successful athletic career, Huebner cites winning her first national championship at the 2019 NCAA Division II National Championships as her proudest moment. With that victory in the heptathlon, she became only the fifth student-athlete in SVSU’s track and field program to claim an NCAA national title and the first since Paul Markel in 2001.

“That was the first time that I really felt like all the hard work that I put in had finally paid off.”

At SVSU, Huebner earned numerous regional and national accolades for her athletic achievements:

For her academic prowess, Huebner appeared on the Saginaw Valley State President’s List five times for earning a 4.0 GPA in a semester.

Huebner credits her coaches, teammates and occupational therapy faculty for her success.

“Everyone was very supportive anytime I had to miss classes for traveling, practice, or things like that. I felt very supported academically.”

She is also thankful for support from her family.

“My mom never missed a track meet and seeing my family travel across the country to watch me compete in nationals is very meaningful to me.”

Huebner’s individual success contributed to team success, which she considers among her greatest athletic achievements: helping the track and field team rise in the NCAA Division II Track and Field Championships to place fifth in the nation during her final season.

“Coming into college, I just wanted to do well for myself. Over time, I realized that my putting in the work and doing everything that I can really helps encourage or inspire and builds a culture at practice. I really made it a point to do everything that I could to be successful, and I think that positivity and that attitude is contagious. Athletes currently on the team picked up on that and then all of our recruits coming in picked up that culture of success,” Huebner said. 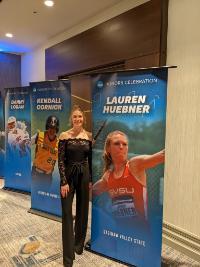 A leader on and off the track, Huebner’s advice to student-athletes is a mantra from the track and field team’s practices: Trust the process.

In addition to her athletic pursuits, Huebner served as treasurer of the SVSU chapter of Pi Theta Epsilon, an occupational therapy honor society, and the community service chair on SVSU’s Student-Athlete Advisory Committee. She volunteered with the Toni and Trish House in Auburn, which is an organization serving terminally ill patients, and the Ascension Lutheran Church Back to School Fair to provide school supplies, clothing and food to families in need. Huebner also tutored at the Writing Center on campus.

Prior to SVSU, Huebner excelled in track and field in middle school and went on to set records at Swan Valley High School in the women’s 100- and 200-meter sprints, 100- and 300-meter hurdles and long jump and is part of three relay records in the 400, 800 and 1,600. She also stood out in volleyball and earned all-state honors in both sports. Other high school awards include:

The NCAA Today’s Top-10 award recognizes former student-athletes across all divisions for their successes on the field, in the classroom, and in the community. The honorees were selected by the NCAA Honors Committee, composed of representatives of NCAA member schools, conferences and distinguished citizens, including past awardees. A video of the ceremony is available at https://youtu.be/WDHLciApuTg?t=1280.