SVSU Board selects George Grant to serve as 5th president

Grant is the current chancellor at Penn State University-Berks, prior dean at Grand Valley State 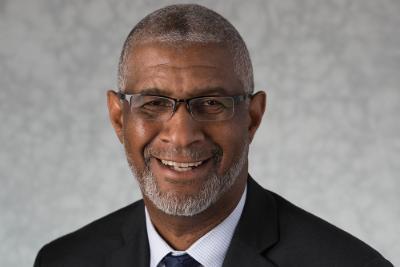 The Saginaw Valley State University Board of Control appointed George Grant Jr. to serve as the institution’s fifth president during a special meeting of the Board Tuesday, Aug. 9. Grant will succeed Donald Bachand, who is retiring after serving as president since 2014.

Grant is currently serving as chancellor of Pennsylvania State University-Berks, a campus of more than 2,100 students. Prior to that, he spent 24 years at Grand Valley State University in Michigan, including 12 years as dean of the College of Community and Public Service.

“We are delighted that Chancellor Grant has agreed to join SVSU and serve as our next president,” said Vicki Rupp, chair of the SVSU Board of Control. “He is a caring, committed and innovative leader with an outstanding record of success in academic program development, fundraising, and community outreach, among many accomplishments.

“I would like to thank the faculty, staff, students and community members who served on the presidential search advisory committee for their thorough and exemplary work in providing the Board with strong candidates. In the interview process, George’s diverse leadership experiences, his commitment to inclusion, and his understanding of Michigan really caused him to stand out to the Board,” Rupp added.

Grant began his tenure as chancellor of PSU-Berks on January 4, 2021. A Detroit native, he welcomes the opportunity to return to his home state and to join a university that aligns with his values.

“I know the history and tradition of SVSU. Its people have a passion for academic exploration and achievement, and it continues to ensure that the opportunities of higher education are attainable to assist students in meeting their full potential,” Grant said.

“I was not looking for a new opportunity,” Grant added, “but SVSU’s mission, strategic plan and commitment to community engagement are in line with my personal values. SVSU is committed to educating the citizens of Michigan, while also providing the opportunity for a quality education to people across the country and around the world. I cannot wait to get started.”

SVSU Board of Control member John Cherry, former Lieutenant Governor for the State of Michigan, noted that the university has enjoyed remarkable consistency in its core values, and he believes Grant will build upon that legacy.

“George is a devoted and experienced educator who will guide SVSU in a manner that will prepare and equip SVSU to meet the future challenges of higher education while maintaining a community culture that we have all come to love and cherish,” Cherry said.

During his tenure as dean at Grand Valley, Grant raised more than $46 million. He also developed new academic programming to support adult learners who were juggling work, family, and other demands. Grant implemented Master of Social Work programs in rural communities across Michigan to give students access to an advanced degree to better serve their communities.

Rajkumari Wiener, vice chair of the Board of Control and an SVSU alumna, appreciates Grant’s record of bringing people together.

“George’s career has been characterized by his commitment to collaboration, inclusion, and diversity,” Wiener said. “He has a broad vision of institutional and community relationships. SVSU has been blessed with a great tradition of presidential leadership. George will add to that tradition.”

SVSU has seen only four prior presidents since its founding in 1963.

Grant will be the first person of color to serve as SVSU president. He will begin his duties at SVSU December 1.

» View a video introduction to the new president