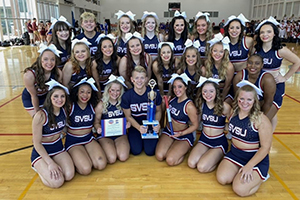 One of Saginaw Valley State University’s club sports teams has something to cheer about. The university’s Cheer team recently won two of the three competition events at the National Cheerleaders Association (NCA) College Camp in Louisville. In the intermediate small coed division, SVSU’s Cheer team won the Rally Routine Championship and the Game Day Championship. The team also earned a silver bid to attend the NCA College Nationals Championship in April 2022. The silver bid gives the team priority registration for the championship competition and will result in significant cost savings.

"The hard work and dedication that was displayed by each athlete resulted in huge team success,” said Frances Mills, head coach of the Cheer team. “I am so proud of everything this team has accomplished so far this year.”

The SVSU Cheer team attended the three-day camp at the University of Louisville from July 31 to August 2. The camp was one of nine NCA overnight and resort camps held this summer. The SVSU Cheer team participated in a variety of skill- and team-building classes leading up to evaluations and competitions.

All 25 athletes on the Cheer team attended the camp. They are:

Mills said 15 cheerleading teams attended the camp. SVSU was one of three teams in the intermediate small coed division, which also included DePaul University and Bellarmine University. In addition to the Rally Routine and Game Day competitions, SVSU competed in the Game Day Runoff.

Cheer is one of 21 club sports at Saginaw Valley State University.  Club sports allow students to continue to compete in their sport of choice at a collegiate level, improve their athletic skill set, and gain opportunities for personal growth and development of leadership skills.

SVSU’s fall term will begin Monday, August 30, and the club sports are preparing for a full fall semester.

“I am excited for the future of this very talented group of athletes,” Mills said.