The SVSU Theatre department presents Joan: The Girl of Arc. 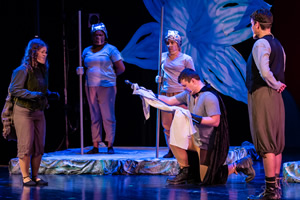 It has been nearly a year since the COVID-19 pandemic caused the closure of theaters throughout the country; yet, for SVSU students, the show goes on.

Students will showcase their talents during a five-performance run of “Joan: The Girl of Arc” by Darrah Cloud. The play is directed by Peggy Mead-Finizio, assistant professor of theatre, in her SVSU directing debut.

With a cast of 14, supported by 14 crew members, the play tells the story of Joan D’Arc, a shepherd in Domrémy, France, in the late 1420s. While tending sheep one day, Joan hears voices, claiming to be saints, who ask her to go to war for France. Ultimately, the prince of France turns over leadership of his army to Joan, who leads the soldiers to victory over the British in the Hundred Years’ War. Despite her victory, Joan is sentenced to death when she refuses to deny the voices she heard.

The play will be delivered virtually at 7:30 p.m. Wednesday, Feb. 24 through Saturday, Feb. 27, and at 3 p.m. Sunday, Feb. 28. Tickets are $10 and must be purchased online. One hour before the performance, ticketholders will be emailed a link where they can watch the performance.

Each show is performed and live streamed using NewTek TriCaster® 860 video equipment. “Joan” is the first SVSU Theatre performance being live streamed to audiences. The department’s most recent performance, “No. 6,” was pre-recorded.

“Directing this show for live streaming has been a little different,” said Mead-Finizio, who recently was recognized nationally for innovation in teaching by the Kennedy Center American College Theater Festival. “So has design. Everyone is working from what people see on a monitor versus on the stage. I’ve had to adjust blocking [positioning of actors on the stage] to accommodate camera angles; shifting an actor even two inches can make a huge difference on camera.

“Our students are really happy to be performing and trying new things,” said Mead-Finizio. “Not all schools are doing productions.”

Teaching and rehearsing during the pandemic have required some adaptation in observance of health and safety protocols. Mead-Finizio said the capacity inside the Malcolm Field Theatre for Performing Arts has been reduced to 50, with no more than 20 people allowed on stage at one time, and physical distancing of 6 feet is being enforced. Further, moveable props and set pieces have dedicated handlers, and the sets are wiped down following each scene.

To deliver the most expressive performance possible, cast members wear masks made of clear plastic with a soft foam frame that can be tinted to match the actors’ skin tones. Mead-Finizio said the PPE (personal protective equipment) presented a challenge for the student sound designer, Lucas Inman, a junior theatre major from Saginaw, who solved the issue by taping microphones to the actors’ foreheads.

Students and faculty alike have risen to the challenges during the pandemic to maintain a regular schedule of classes and performances.

“Last spring, when we transitioned on online instruction, I felt like I was swimming upstream,” Mead-Finizio said. “SVSU’s Center for Academic Innovation gave us so many tools to help us that we were able to continue instruction pretty seamlessly.”

The department was even able to deliver a performance of “Macbeth” last spring via Zoom, with all of the actors joining the performance from their homes.

Even though in-person instruction resumed in the fall, some of Mead-Finizio’s classes are large enough to require a flex classroom, with half the class in person and half the class virtual.

“That has made our classroom engagement dynamics a little different,” she said. “We’ve had to try different things to get people engaged. One thing I really appreciate about SVSU’s Theatre Department is that everyone has a slightly different skill set, and we’re sharing what we know and learn with one another.”