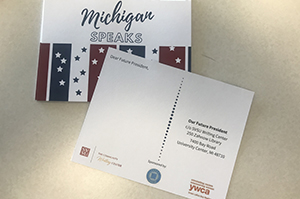 The nonpartisan project — also sponsored by the YWCA Great Lakes Bay Region and the U.S. Department of Arts and Culture Saginaw Outpost — collects the postcards prior to the election, with the promise of mailing the messages to the winning candidate in January. The approach allows community members to focus on issues that are important to them when writing the postcard messages, organizers say.

“We believe people’s individual voices matter,” said Helen Raica-Klotz, director of SVSU’s Writing Center. “We’re pleased to support this project, which allows people to share their hope, concerns, and goals for our country with our future leader.”

Community members can participate in the “Dear Future President” postcard project in several ways. Postcards will be available throughout the Great Lakes Bay Region at Midland, Saginaw, and Bay county public libraries, including multiple coffee shops throughout the area. Residents can also fill out an electronic postcard online at www.svsu.edu/communityengagement/communityoutreach.

Teachers can request postcards for their students by emailing writingcenter@svsu.edu.

All postcards must be received no later than Sunday, Nov. 1.

“We’re excited to be a part of the postcard campaign,” said Moira Branigan, executive director of the YWCA Great Lakes Bay Region. “Our hope is everyone who participates is motivated to vote in November. For students – our future voters – it’s an introduction to civic engagement.”