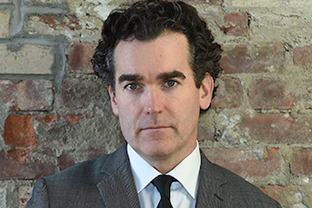 Saginaw-born Broadway and Hollywood actor Brian d’Arcy James will grace the stage alongside Saginaw Valley State University student performers as part of a one-night-only song-and-dance extravaganza at the campus next month.

The curtains open for “An Actors Showcase” Monday, March 30, at 7:30 p.m. in SVSU’s Malcolm Field Theatre for Performing Arts.

Joining James that evening will be some of the university’s top theatre students as well as award-winning Gershwin pianist Kevin Cole. James plans to meet, mentor and rehearse with the students in advance of the event, when they will perform a series of songs and monologues on stage.

The event is free, but due to anticipated high demand, attendees must reserve tickets. Once the theatre reaches capacity, SVSU will offer ticket reservations to a simulcast in the adjoining campus venue, the Rhea Miller Recital Hall.

James' introduction to much of the performing arts world began on Broadway. Perhaps most famously there, he donned green makeup as the titular character in “Shrek the Musical” from 2008-09, earning a Tony Award nomination for Best Leading Actor in a Musical along the way. The performance later was captured for a feature-length film available now on Netflix.

Playing Shrek earned him the second of three Tony Award nominations for leading actor in a musical. The first was for “Sweet Smell of Success” in 2002. Most recently, he received a nomination for “Something Rotten!” in 2015.

James’ star continued to brighten when he transitioned to the big screen. Perhaps his most notable movie role to date was in “Spotlight,” which won Best Picture at the Academy Awards after its release in 2015. He portrayed real-life Boston Globe reporter Matt Carroll in the drama about a team of newspaper journalists uncovering a community scandal.

He became even more of a household name when he appeared in the popular Netflix series, “13 Reasons Why,” now entering its fourth and final season. He plays Andrew Baker, the father of the character whose suicide sets the series’ plot in motion.

Later this year, the 51-year-old is scheduled to appear in the Steven Spielberg-directed remake of “West Side Story.”