Once determined to continue his education without pause, SVSU alumnus now thrives at Dow 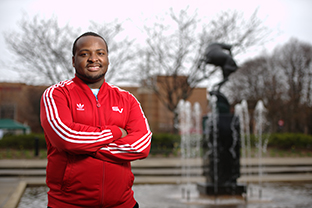 Kevin Finley, a 2017 alumnus of Saginaw Valley State University, is proof that challenges can be overcome with drive and opportunity.

The Flint native was determined to create a better future for himself and his community, despite facing adversity at a young age.

"I was beaten up really badly in high school," Finley said. "I was really, really frustrated but then I realized, it's not about who does what to you. It's about your response. I can say, 'I don't want to see that happen to someone else so let me show people that there's more to life than negativity.' I don't want to let stuff like that hinder me. I just want to stay positive."

A first-generation college student, Finley defied limits to overcome obstacles and forge his own path to success. After high school, he was determined to continue his education without pause, enrolling at SVSU to pursue a career in accounting.

“Growing up in the inner city you can get distracted by other things, but going to college was always important to me. I saw people in my community grow up without opportunities to do what they wanted to do,” he said.

Going to college opened new doors for Finley, and the opportunities he had at SVSU helped him to push his limits and better prepare for a successful career.

Finley took every opportunity to get involved with student organizations, on-campus jobs, and programs of distinction at SVSU, including studying abroad to Asia with the university’s Roberts Fellowship Program, which annually provides year-long leadership development opportunities for a select group of students. The program helped him expand his worldview and open his mind to new possibilities.

He also took advantage of networking opportunities and practice interviews through SVSU’s Office of Career Services, which helped him make connections and secure an internship at Dow, a Midland-based global corporation and one of the region’s largest employers. His perseverance and hard work paid off with a full-time job immediately after he received his bachelor’s degree in accounting.

He recalls how the leadership and communication skills that he developed at SVSU helped to grow his confidence and prepare him for his professional duties, including leadings events at Dow.

“These resources were really impactful from a professional standpoint. I really appreciate SVSU and I’ll always be grateful for them helping me learn who I am and how to lead,” he said.

Finley began his career at Dow as a financial accountant, and through his dedication and determination, was recently promoted to the corporate audit department of the organization.

He hopes to continue the trajectory of his career success and is diligently working toward his next professional milestone— becoming a certified public accountant. Finley has already passed his first exam and is studying for the following three in order to complete his certification.

Finley became a mentor to other students during his time at SVSU, and he has continued this tradition of mentorship into his professional life as well. He hopes to encourage and inspire others to pursue their passions and go after what they want to achieve. As he learned first-hand from his own pursuits, following a high school diploma immediately with a college education at SVSU provided him with the momentum needed to earn him a full-time job that fulfills him.

“If you really want to do something, take a chance on yourself and believe in yourself,” Finley said. “It’s a learning opportunity, whatever you go through.”