Since childhood, Gabrielle Gittens felt drawn to nature. Now the SVSU alumna is one step closer to a career spent protecting it. 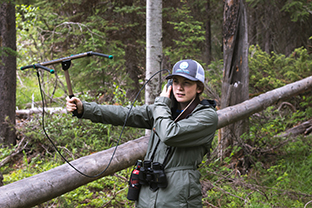 Gabrielle Gittens remembers summers spent laying on a trampoline in her family’s backyard, her eyes pointed skyward and her dreams aimed there too. These memories stretch deep into her childhood, when a 4-year-old girl first soaked in the surrounding sounds of nature, including animals that populated both her suburban neighborhood and her imagination. Sometimes she fantasized her favorite creature – the bald eagle – soared there above her.

Even in those youngest of summers, Gittens recalled a persistent thought occurring to her. At first, it surfaced as a question: "How can we make the planet a better place to live for us all? For people. For animals." Over time, the thought transformed into an answer:

"I will make the planet a better place to live."

In May, Gittens graduated from Saginaw Valley State University, where affordability and opportunity merged to move her closer than ever to fulfilling that lifelong ambition. Her undergraduate experience empowered Gittens to operate – literally – at heights enjoyed by the bald eagles so beloved by her. Her environmental survey research work at SVSU involved piloting drone aircraft up to 200 feet in the air. The resulting credentials were one of many factors that helped secure her a full-ride scholarship to the postgraduate program she begins this fall.

“I wouldn’t have had the same opportunities elsewhere as I had at SVSU,” said Gittens, who earned a bachelor’s degree in geography from the university in May. “So many people from SVSU helped me get to where I am.”

For the next two years, Gittens will study for a master’s degree in geography with a focus on environmental analysis and resource management at Western Michigan University. Once graduated, she hopes to work as a steward of the environment – perhaps as a park ranger or environmental scientist –with an agency such as the National Park Service or the U.S. Forest Service.

“My heart has been set on this for about as long as I can remember,” said the Columbus Township native.

Along with sky-gazing on her childhood trampoline, Gittens’ formative experiences as a conservationist involved family, friends and teachers introducing her to the environment. She was instilled with a passion for the outdoors by her mother, an avid gardener who tasked her daughter with picking strawberries and peppers from their yard. As a kid, Gittens and two of her cousins shared an affinity for animals, and the trio often talked about growing older and occupying jobs that supported living creatures. Gittens regularly visited Peck, where property and a pole barn owned by the family of her best friend exposed her to a rural environment and its animal inhabitants. And, at school, she learned about climate change and its devastating consequences.

“I remember seeing videos of polar bears dying because they couldn’t find ice to travel on,” Gittens said. “That horrified me. As a kid, whenever I made a wish, I wished for climate change to end.”

She attended Merritt Academy, a New Haven-based charter school authorized by SVSU. While Gittens graduated as the salutatorian in her class, she said she under-performed on her ACT test, which limited her ability to secure scholarships. Her family also was struggling financially at the time, endangering her chances to attend college.

Gittens was determined to pursue her professional ambitions, though. Her higher education dreams were rescued by SVSU, a state university with the most affordable tuition rate in Michigan as well as home to more than 1,000 private and university-funded scholarship opportunities. Gittens was able to benefit from one of those opportunities: the Public School Academy Scholarship, which SVSU provides to qualifying students who attended an SVSU-authorized charter school. More than 11,000 students currently attend SVSU-authorized charter academies.

“Honestly, that scholarship made college possible for me,” said Gittens, who graduated with little debt. “I wouldn’t be where I am without it and without the professors at SVSU.”

After beginning as a biology major, Gittens switched to geography studies when she earned a student research opportunity at SVSU with Julie Commerford. The assistant professor of geography led a study of pollen in Avery Lake in Illinois, where environmental analysis helped determine how human activity shaped the environment there. The experience left Gittens enamored with geography and introduced her to the professor she still considers her mentor.

“She’s really pushed me forward, toward where I want to be,” Gittens said of Commerford. “She’s incredible.”

In November 2019, Gittens presented the study at The East Lakes Division of the American Association of Geographers conference. Her poster presentation for the project, titled “Reconstructing Ancient Landscapes: Pollen as the Key to the Past,” won second place in a competition there.

The work meant programming the flight of a quadcopter drone over the refuge and processing the images captured to determine the impact of the phragmites. To perform those duties, Gittens became certified to fly drones.

Other experiences available at the campus enriched her abilities. Along with her academic degree, Gittens received her GIS certification, which is earned by students seeking advanced skills in the application of geographic information systems.

While attending SVSU, she also spent a summer with a study abroad program in Montana. There, she earned college credits while learning how to track bears, wolves and other wildlife populating the Seeley-Swan Valley. She worked with the community to shape policy relating to endangered species and the humans living near them in that region.

The accumulation of experiences and awards led to her receiving a full-ride scholarship at Western Michigan University, she said. Her first day of class is Sept. 2. She plans to work as a student teaching assistant there, providing the same sort of guidance that led her closer than ever to realizing ambitions she first felt as a child in her backyard, where the blue sky above and the surrounding nature seemed to call her to step forward.

“I’m looking forward to what comes next,” Gittens said.