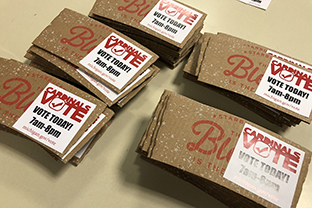 A September report by The Institute for Democracy & Higher Education — housed at Tufts University’s Jonathan M. Tisch College of Civic Life — shows the percentage of SVSU students voting doubled during the 2018 election compared to the 2014 election, from 18.4% to 36.8% last year. An upward trend in election participation was experienced at higher education institutions across the nation, the report showed.

“I was really excited to see a spike at the university level and nationwide,” said Riley Hupfer, director of SVSU’s Center for Community Engagement. “It represents a strong commitment by our university and youth in our country to be part of the voting process.”

SVSU’s Center for Community Engagement — supported by student Democracy Fellows with the university’s Cardinals Vote initiative, a nonpartisan effort dedicated to connecting SVSU students with opportunities to engage in the democratic system — organized a number of voter registration drives leading up to November 2018, Hupfer said.

Hupfer said more than 500 students registered to vote as a direct result of Cardinals Vote, but it’s likely the number was higher.

The Institute for Democracy & Higher Education reported other positive trends at SVSU. The study indicated the voter registration rate for SVSU students increased from 60% in 2014 to 67.1% in 2018; and the voting rate of registered students climbed from 30.6% to 54.8% during the same span.

SVSU was one of more than 1,000 higher education institutions to participate in The Institute for Democracy & Higher Education’s report, titled the National Study of Learning, Voting, and Engagement (NSLVE).

The national NSLVE report can be read online at https://idhe.tufts.edu/2018data.