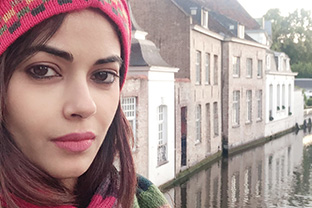 Fresh from the debut of one of her most anticipated films, a leading Bollywood actor this month will return to the campus she considered transformative in her development: Saginaw Valley State University.

Meera Chopra, an SVSU alumna who went on to star in more than 20 films produced in her native India, will serve as a Dow Visiting Artist at her alma mater Thursday, Sept. 26, at 7 p.m. in SVSU's Malcolm Field Theatre for Performing Arts. The event is free and open to the public.

“I’m coming to Saginaw to talk to you, share some stories, talk about life and just have lots of fun,” Chopra said. “I’m really looking forward to it. Saginaw is something which made me what I am today.”

Chopra received a master’s degree in communication and multimedia from SVSU in 2003, just two years before she starred in the Tamil-language romantic drama, “Anbe Aaruyire.” Her breakout hit found success with fans of the southern India film industry. She went by the stage name Nila at the time.

She followed "Anbe Aaruyire" with appearances in a number of Indian films in other languages — Telugu and Kannada — such as her critically-acclaimed performance in the 2008 romantic drama, “Vaana.”

After moving to India’s film capital, Mumbai, Chopra’s rise as an artist continued with internationally-successful thrillers including “Gangs of Ghosts” and “1920: London”.

Chopra’s acting career has included dramatic portrayals. In “Section 375” — a Hindi-language movie set to debut this Friday, Sept. 13 — Chopra plays a woman whose sexual assault becomes the focus of a court case that examines the misuse of the nation’s anti-rape laws.

Chopra, a proponent of female empowerment and women’s rights, said she accepted the challenge of portraying a sexual assault survivor to raise awareness of the number of unreported rape cases in India and to highlight victims’ rights.

“Playing the character was very traumatic for me in the beginning, and once the filming was over, it took me some time to get out of it,” Chopra told The Times of India in August. “Shooting for this role really broke my heart to even imagine what real rape victims go through. I hope this movie gives strength to women to fight for justice.”

Chopra’s appearance at SVSU is part of the university's fall 2019 Visiting Scholars and Artists speaker series.

For more information on Chopra’s appearance and the speaker series, visit svsu.edu/publiclectures.