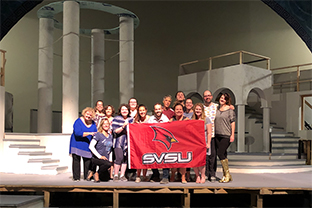 “Unprecedented” because of the scale of collaboration, a multi-community theatre production of the hit musical comedy “Mamma Mia!” debuting Friday will feature a cast and crew heavy with Saginaw Valley State University connections.

The director (a faculty member), lead actor (an alumna) and stage manager (a current student) are among 17 people with SVSU ties participating in the weeks-long run of the Great Lakes Bay Regional Alliance-produced show.

Combining talent and resources from three regional theatres including Bay City Players, public performances are scheduled at The Midland Center for the Arts on Fridays through Sundays, Sept. 20-22 and Sept. 27-29. Free shows exclusively for area school students are planned at Pit & Balcony Theatre in Saginaw during the first week of October.

“It’s an ambitious project — a unique project — and one that this region is uniquely equipped to take on,” said "Mamma Mia!" director Tommy Wedge, an assistant professor of theatre at the university. “It really shows how SVSU is part of that theatre community too. I don’t think it’s overstating it that this is unprecedented.”

Nine alumni, five students and three educators from SVSU are involved as cast or crew members. Nine will act on stage while eight will perform behind-the-scenes work including directing, stage management as well as lighting design and engineering.

Among the participating alumni is Holly Booth, who portrays Donna, the lead role made popular by Meryl Streep in the 2008 film adaptation and its 2018 sequel. Off stage, Booth is a Midland County Educational Service Agency teacher who received a bachelor’s degree in elementary and special education at SVSU in 1997 as well as learning disabilities and emotional impairment education endorsements from the university.

SVSU students also are critical to the success of “Mamma Mia!” For instance, Melanie Frasca, a theatre major from Waterford, will serve as stage manager. That’s no small task for a dynamic, fast-moving musical that features 38 actors as well as two different stages with two different stage designs for its Midland and Saginaw settings, Wedge said.

“In classes, we talk about how the university is part of the community,” he said. “It’s thrilling to see students experience that in real time. They see the class work we do on campus and then can turn around and be that stage manager in our show while working with alumni who graduated from our program.”

Seating remains available for the public performances at The Midland Center for the Arts. Friday and Saturday shows are at 7:30 p.m. and Sunday matinees begin at 3 p.m.

"Mamma Mia!" debuted on a London stage in 1999 and moved to Broadway for a 14-year run beginning in 2001. The story starts on the eve of a young woman's wedding. Her desire to find her biological father leads to events that reunite her mother (Donna, played by Booth) with three ex-lovers from decades earlier. The plot unfolds to the upbeat sounds of ABBA music.