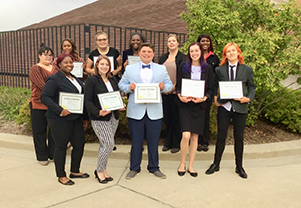 Five SVSU students qualified for a national tournament spot in April as a result of their individual performances during the team's victory Friday, Sept. 27, at Oakland Community College's Orchard Ridge campus.

Amy Pierce, an SVSU associate professor of communication serving as co-adviser for the forensics group, said a forensics-focused communication class offered at the university allowed students to prepare early in the semester for the competition.

"While most of the students in the class had no previous experience with forensics, the class introduces them to the norms and culture of competitive speaking," she said, "which sets us apart from other schools."

These students placed in the following categories during individual competition:

The SVSU team will compete in a Michigan Intercollegiate Speech League tournament at its own campus in December. The National Forensics Association Championship Tournament, meanwhile, will be hosted by University of Wisconsin-Whitewater in April.

Along with Pierce, the SVSU team is advised by Ryan Rigda, a lecturer of communication at the university.