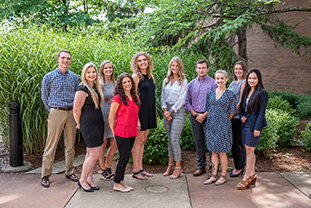 Saginaw Valley State University students passionate about pursuing health care professions combined their outstanding academic preparation with exemplary community service commitment to be accepted early into medical school. They did so using a program that networks talent from SVSU to other institutions.

Heidi Lang, SVSU's pre-health professions adviser, said the 10-for-10 feat is no small accomplishment, especially considering the overall acceptance rate for medical schools in the U.S. is about 40 percent.

While SVSU has had 100 percent acceptance in the past, this is the first year 10 students applied. Usually, three or four students apply, Lang said.

“This year’s class is exceptionally strong, and I am not at all surprised to see 100 percent acceptance,” she said. “Among the 10 students, we have individuals who have volunteered and worked in local hospitals and clinics, but they have all gone a step further to truly make an impact on the community, especially serving those who are from under-served communities.”

Lang said each student who applied this year is dedicated to helping others and will succeed in their careers.

“One thing they all have in common is a genuine desire to serve others through health care,” she said. “They will be a great addition to their respective medical school classes and, perhaps more importantly, the communities where they eventually practice.”

Several of the SVSU students — including Darby Richards — cited Lang’s help as a key reason for their success.

“Heidi is a great asset to have,” said Richards, a biology major from West Branch. “She really advocates for us and gets us prepared. She does mock interviews in the fall to get us ready. I think having that preparation really helps.”

Richards performs community service through Standing in the Gap, a Christian-based student organization; she also pushes herself academically through SVSU’s Honors program. She will be the first SVSU student to attend Wayne State University under the EAP program, as the university joined the partnership this year.

“I’m really interested in working with under-served populations in lower income areas,” she said. “That’s one of the reasons I was so interested in Wayne. They’re right in the heart of Detroit, and they do a lot outreach in the region with the homeless population and the low-income population.”

Cailtin Coulter will be attending CMU next fall. She also is in SVSU’s Honors program, and she is a past president of SVSU's student government, Student Association. Coulter was thankful for the opportunities afforded her by attending a university where faculty and staff know her personally.

“At a lot of schools, there’s so many people that you can get lost in the mix,” said Coulter, a biology major from Mount Morris. “Here, I think I’ve had opportunities I wouldn’t have had other places.”

Among other opportunities, Coulter works as a medical scribe at Covenant Medical Center. She said Central Michigan University College of Medicine's commitment to philanthropy was a key reason for wanting to attend the medical school there.

“My ultimate goal down the road is to serve on a nonprofit board in the community I am working in,” she said. “Their model of curriculum is based around philanthropy, as well as every year, you are required to do a service project."

Below is a list of each SVSU student accepted into medical school for 2020 under EAP agreements, organized by university.