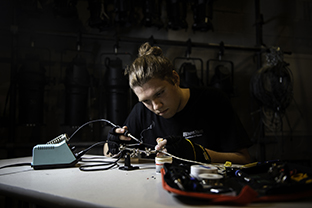 A sophomore’s passion for theatre sound and lighting design — along with his quickly-growing résumé of experience and training in the field — will be on display during a Saginaw Valley State University production of “Proof” later this month.

Hot off both summer courses taught at a Las Vegas institute and a key behind-the-scenes role for a hit musical produced across the Great Lakes Bay Region, Lucas Inman next will design an “ultra-real” soundscape aimed at transporting audiences deep into the world of the David Auburn-penned Pulitzer Prize-winning drama.

The story of “Proof” — about a troubled woman struggling with her late father’s legacy as a brilliant mathematician — takes place in a single setting: the backyard of a house. In his role as sound designer, Inman will record and edit audio from real outdoor environments that later will be used to simulate the setting of the play on SVSU's stage via speakers.

David Rzeszutek, the associate professor of theatre serving as the play's director, said Inman’s work will create a rich and immersive environment that will better connect audiences with the characters of "Proof."

"This whole show has a sound design underlying throughout the whole thing, almost like you might hear in a movie,” Rzeszutek said.

Creating an engaging theatrical experience requires a skill Inman has been fine-tuning since childhood, when he discovered a passion for behind-the-scenes work managing sound design for events at his church and vacation Bible school. Later, as a student at Heritage High School, he was involved in theatre productions there as an audio engineer.

The Saginaw native enrolled at SVSU last year, providing sound and lighting design as a freshman for the university’s theatre productions. The theatre major's talent and enthusiasm for the work at the collegiate level earned him invitations to national conferences offering training as well as opportunities to learn from some of the top professionals working in the entertainment industry today.

For his next role back in Michigan, he applied many of the lessons learned in Las Vegas.

Inman worked as an LED (light-emitting diode) tape electrician during the Great Lakes Bay Regional Alliance’s fall production of “Mamma Mia!” The experience involved complex planning for the play's two stages set at the Midland Center for the Arts as well as Pit and Balcony Theatre in Saginaw. The student soldered over 75 pieces of LED tape to various set pieces. Each light was individually added to a circuit that was remotely controlled and programmed by the production's crew to coordinate with — and compliment — the performances of the musical's massive cast of 38 actors.

Rzeszutek said it's impressive for a second-year student to possess as much skill as Inman wields in sound and lighting design. The director said he was excited to see those talents at work for "Proof."

“Usually, at this point, a sophomore is under someone’s wing or working as an assistant on a production,” Rzeszutek said. “As a sophomore, this is an extremely nice opportunity for Lucas.”

Tickets for “Proof” can be purchased online at www.etix.com/ticket/v/14187.