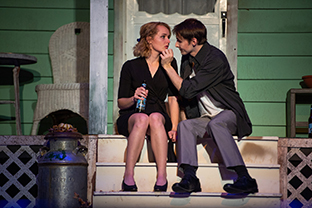 Audiences familiar with Abigail Burgess' on-stage performance earlier this year as a Dolly Parton-inspired spitfire may have a hard time recognizing her as she takes center stage again — this time playing the troubled young woman leading Saginaw Valley State University's production of "Proof," a Pulitzer Prize-winning drama about a mourning family in crisis.

Burgess, a theatre major, will play the drama's lead, Catherine. The role is the follow-up to her performance in SVSU's production of the musical version of "9 to 5" in April, when the Commerce Township native played a gregarious role made famous in film by Parton.

The shift from playing a larger-than-life character in a musical to a character grounded in a harsh reality was a challenge Burgess was excited to accept.

"The role of Catherine is very different from other roles I’ve played, purely because this show is so set in reality, and every detail must be incredibly specific," she said.

“Proof” follows the story of Catherine as she struggles with her late father’s legacy as a brilliant mathematician. Following his death, Catherine must deal with her volatile emotions; the arrival of her estranged sister, Claire; and the attentions of Hal, a former student of her father's who hopes to find valuable work in the 103 notebooks that her father left behind. Over the course of one weekend, a burgeoning romance and the discovery of a mysterious notebook draw Catherine into the most difficult problem of all: How much of her father's madness — or genius — will she inherit?

Burgess said the play’s family dynamic — and how it explores issues such as grief and mental health — will make a memorable experience for audiences.

“The play is set in 1999; During this time, mental health carried even more of a stigma than it does today,” she said. “However, I think that the journey of these characters shows that struggles with mental health are still prominent here and now.”

Burgess’ favorite part of acting — especially in “Proof” — involves the relationships formed with cast and crew members, she said.

“It takes so many working pieces to make theatre happen,” Burgess said. “As both an actor and the costume designer for the production, I am so grateful for such an amazing and hardworking cast and crew.”

David Rzeszutek, SVSU associate professor of theatre, will serve as director of "Proof."

Like "9 to 5," the story of "Proof" also was featured on the big screen. A 2005 film starred Gwyneth Paltrow in the role of Catherine.