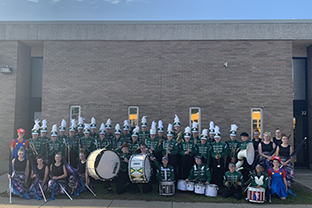 A Saginaw Valley State University alumnus' neighborly nature was music to the ears of one northern Michigan high school last week. Now the support the school marching band director offered has attracted the attention of media outlets across the country.

Brandon Deike, who received a bachelor's degree in music education at SVSU in 2009, made national news when his school's marching band performed during a football game at another high school, which lacked a band. Deike brought the Forest Area Schools marching band he directs to Maple City Glen Lake for its Friday, Sept. 27 home game. The arrangement was made after Glen Lake Athletic Director Mark Mattson called Deike the same week the band director's high school lost its football team due to a lack of players.

"We had a news team come in about our football team being shut down," Deike said. "They talked to the band and asked them how that affected them. I think the athletic director saw that story, so he called me and said, 'Hey, we don't have a high school band right now, and you don't have a football team, so do you want to make something happen?'"

Deike said he put the offer to a vote among his band students who would have to travel to Glen Lake, about 45 miles from Deike's school, which is near Traverse City.

"When I talked to the band, I said, 'This is quick. We've got a three-day turnaround. You have to make an adult decision on whether you want to do this or not. We can haul all our stuff up there, arrange everything and help these kids out,'" Deike said. "All the band raised their hands."

Deike said he believes his students made the leap of faith to go because Forest Area had lost its band program a few years prior.

"Our story is, we were worse off than Glen Lake was," Deike said. "We've been rebuilding since 2011. I think a lot of the kids remembered where we come from and what we had to face, and they really wanted to help these kids."

"Rebuilding can be done if you put yourself in the right place," Deike said. "I think the kids were coming off that awesome year, and we see Glen Lake is missing out without band. So we wanted to show them how successful they can be in band."

Shortly after the Forest Area band decided to play at Glen Lake, the story was picked up nationally by outlets such as The Associated Press, Detroit Free Press, Miami Herald and CNN. Deike said he was surprised by the attention the story received.

"We're in northern Michigan, in the woods, and we're removed from the country," he said. "You never go into something thinking, 'Well, let's hope this makes the national news.'"

While Deike was happy the story was circulated, he said there was "one thing missing" from most of the articles.

"Our program was basically born out of the ashes of nothing," he said. "For our kids to turn around and do this seven or eight years later is a testament to the work they put in. It's just really cool."

He said the band's decision to play at Glen Lake would be an inspiring story for more outlets to share. A social media campaign has begun, attempting to get the story told on NBC's The Ellen DeGeneres Show.

"Basically, our school is low-income, low-socioeconomic status," he said. "We have nothing in the way of money, budget or instruments. We're working with chicken wire and duct tape here. From what we've come from and where we've gone, for another school an hour away to call us and say, 'Hey, come be our band,' why wouldn't you want to share that story?"

Deike said his students enjoyed their experience at Glen Lake and would return if asked.

"We're looking at schedules to see about returning," he said. "If we can line it up, we will return. I know the music director there is trying to rebuild their band, so I don't want to step on their toes. If they've got their vision to get this thing going again, that's great."

He said the Forest Area band would be more than willing to lend their support as Glen Lake rebuilds.

"I think the bigger story is that you can go to rags to —not riches — but 'rags to successful,' and turn it all around so you can be someone who helps others take risks and support them," he said.