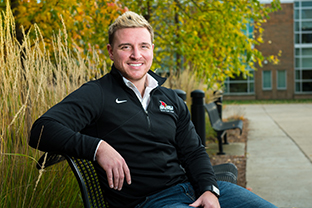 Thanks in part to financial support through the Robert and Ellen Thompson Military Scholarship at SVSU, the political science major from Bay City is closing in on his mission to graduate and return to military service.

Fowler served as a U.S. Marine and presidential sentry for five years. He said his training was grueling, but that he always had his eyes set on achieving his goals.

“This position required immense commitment and persistence in the face of adversity,” Fowler said. “Each time a new obstacle came my way, I prayed I would have the resolve to push through.”

His ultimate goal in the service – to be one of the White House sentries, comprised of four Marine Corps non-commissioned officers who act as a ceremonial guard outside the West Wing of the White House – proved to be just out of his reach.

“The aesthetic for the media required Marines be within a few inches of each other when standing outside the West Wing — for presentation. I was not 6-foot, 4-inches tall as Corporal Bernard was, and thus had come up short,” Fowler said.

He was devastated at the news but turned it into an opportunity to persevere.

“I wanted to prove that, if I was not going to the White House, I would be the best — wherever I went.” Fowler said.

His tour of duty included service as a presidential sentry at Camp David, where his responsibilities included safeguarding the president.

After completing five years of military service, Fowler enrolled at SVSU, which has been consistently named “Best for Vets” by Military Times and a military-friendly university by VIQTORY.

“Time management, commitment and determination are all necessary components for success here. I would like to say I have done well at traversing these obstacles,” said Fowler, president of the Student Veterans of America club at SVSU.

Fowler was able to finance his degree until his senior year, where “again I had come up short.”

When he heard about the Robert and Ellen Thompson Military Scholarship, Folwer knew it would provide him the opportunity to finish one of his life goals.

Fowler is grateful that the scholarship will allow him to complete his degree and return to military service, this time as a college-educated officer.

“I would like to personally thank Mr. and Mrs. Thompson for their gracious efforts in helping students, veterans and, most specifically, for helping me when it mattered most,” Fowler said.

He will join others at SVSU in recognizing Veterans Day during a Veterans Day Celebration that begins at 2 p.m. Monday, Nov. 11 in the Curtiss Hall banquet rooms.

Col. Rhoda K. Daniel will serve as the featured speaker. Today a Freeland business owner, she has served over 34 years in both the Army and the Army National Guard. An Iraq War veteran, Daniel earned the Combat Action Badge, the Meritorious Unit Commendation, and was awarded the Bronze Star Medal.

The public is welcome to attend.