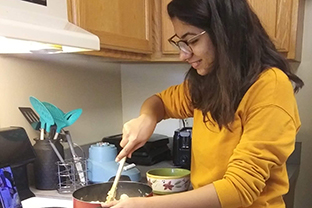 Farwa Fatima is accustomed to international food festivals. When the neighborly Saginaw Valley State University student from Pakistan cooks chicken biriyani, a food festival of sorts materializes in her apartment living room. There, classmates and friends from a variety of cultures — American, Japanese, and Polish, among others — often gather to enjoy the feast and flavors produced by her family recipe.

Fans of Fatima’s food will expand considerably next week. Her chicken biriyani will be one of more than 30 dishes served at SVSU’s 22nd Annual International Food Festival on Tuesday, Nov. 12, from 11 a.m. to 1 p.m., in SVSU’s Marketplace at Doan.

An all-you-can eat admission ticket costs $9.75. The public is welcomed to the feast, which will feature items prepared by the university’s cooking staff using recipes provided by international students from 15 nations.

Fatima, for one, is looking forward to the event.

“It’s a chance to see so much diversity in food and people while eating with others,” the computer science major said. “There are different foods, people, languages and accents — all in one place.”

Fatima plans to taste her classmates’ cooking — she is particularly interested in food from the recipes of students from the Philippines — while offering three dishes from her native Pakistan. The crowd favorite among her trio of selections, she predicts, will be the chicken biriyani.

For Fatima, the food brings her memories of her family. Her mother and sister often would cook the meal for her. It can be a tricky dish to prepare — “Be careful with the salt,” she said — but has proven a wonderfully welcoming way to introduce friends on campus to her cultural roots in Pakistan.

Pat Shelley, SVSU’s international student adviser, said the intercultural exchange remains one of his favorite aspects of the festival.

“Some people differ in their approach to foods, but I encourage people to be open to tasting and trying different foods they may have never eaten before,” he said.

Featured dishes include savory items such as chicken korma from Pakistan and Armenian dolma with grape leaves. Among the sweet items on the menu are chè bắp, a corn pudding from Vietnam, and white fungus sweet soup from China. Drinks selection includes “Da Soda,” a mix of Sprite with milk, from Pakistan.

Among the other nations that will be represented on the menu are Japan, India, Nigeria, Panama, Poland, Taiwan, Tanzania, Saudi Arabia and South Africa.

Members of SVSU’s International Students Club volunteer to represent their country by decorating cooking stations and serving patrons during the event. The festival includes a competition in which participants can act as judges for categories including best sweet dish, best savory dish, most refreshing, best decorations, and best customer service.

Shelley said he expects a large turnout for the festival. About 2,000 people attended the previous event in November 2018.