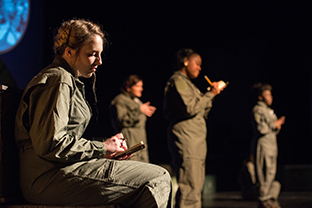 Once a talent on the stage during her days as a student, a Saginaw Valley State University alumna will return to her alma mater next week, this time moving behind the curtains to direct a production of "historic" proportions.

Brianne Dolney, a leading cast member in campus productions before her May graduation, will sit in the director's chair for the SVSU production of “Émilie: La Marquise Du Châtelet Defends Her Life Tonight.”

Performances of the Lauren Gunderson-penned play — a fictional account of a real-life historical figure struggling with her genius legacy and love life — are scheduled Friday and Saturday, Nov. 22-23, at 7:30 p.m. in SVSU's Black Box Theatre. The venue is located in Curtiss Hall, room C180. Tickets are $15 and can be purchased online or at the SVSU Box Office.

Dolney's return to the SVSU stage comes months after her most recent acting performance playing one of the three leads in the April 2019 production of "9 to 5: The Musical." She portrayed the character made famous by Jane Fonda in the 1980 film. Dolney's other recent SVSU stage credits include “The Curious Incident of the Dog in the Night-time” in February 2019, “The Servant of Two Masters” in October 2018, “Death by Design” in February 2018, and “Decision Height" in October 2017.

“It’s really awesome to be able to come back and take on something new in a place that feels like home to me,” she said.

“I think it’s the perfect scenario for my first big directing experience because I’m in an environment I’m comfortable in and have the support of mentors that I’ve been working with all throughout my college experience.”

The production is part of the theatre department's Studio X.P. Program, in which students and alumni are provided an opportunity to direct a play under the guidance of SVSU faculty members. Assistant professors of theatre Margaret "Peggy" Mead-Finizio and Tommy Wedge will serve as advisers this time.

Dolney graduated with a bachelor's degree in political science in May 2019. Since then, she has been traveling and working full-time in a classroom with special needs children and children with autism. The Bay City native said she was excited for her return to the performing arts and, specifically, working as a director on a play that inspired her.

“I wasn’t very familiar with ‘Émilie’ prior to being offered the director position, but as soon as I read it, I fell in love,” she said.

Gunderson's play, published in 2010, offers a theatrical rediscovery of one of history’s most intriguing women. The play's title character, Émilie du Châtelet, was a real-life French philosopher, mathematician, physicist and author from the 18th century. In the play, Émilie spars with her companion and lover, Voltaire, while defending the groundbreaking legacies for which she was denounced until after her death.

Dolney said audiences should expect to be “totally enlightened” when coming to see “Émilie."

“This is a story about an amazingly significant woman of the 1700s who has somehow been brushed over by history,” Dolney said. “Like so many other women of significance from the past, the light is finally being shed on Émilie’s story — it only took three centuries.”

The play is rated for audiences 16 and older due to strong language and mild adult themes.