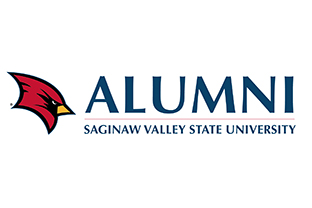 Military veterans, business leaders, and coaches were among the eight individuals whose accomplishments and dedication to excellence were recognized by Saginaw Valley State University’s Alumni Association.

The group selected five individuals to receive its annual Distinguished Alumni award — one for each of SVSU's academic colleges. They are as follows:

The group was honored during a ceremony at SVSU earlier this month. To watch videos featuring recipients, go to https://bit.ly/37wkUir.

Biographies of each recipient are as follows, along with a video feature for each:

Brown received his bachelor’s degree in speech from SVSU in 1985 and later earned a master’s degree from Central Michigan University in 1991. As director of Multicultural Student Initiatives at Kettering University, Brown has traveled across the U.S., Mexico, Puerto Rico, Jamaica, and the Caribbean islands to help African-American, Hispanic and Native American students in the STEM fields. He also received Kettering’s first-ever “Pillar of Excellence Award,” the highest honor a staff member can receive.

Dralle earned her bachelor’s degree in mechanical engineering from SVSU in 1993. Dralle — whose maiden name is Jill Schafsnitz — is the COO of Saginaw County’s largest employer, Nexteer Automotive. She serves on the board of directors for Saginaw Community Foundation. Dralle was recognized by Great Lakes Bay Magazine with its Business Executive Award for female leaders in 2013. In 2014, she was honored by Inforum with an Inner Circle Award.

LaClair graduated from SVSU in 1990 with a bachelor’s degree in physical and health education. LaClair works for Bronson Community Schools as assistant principal, athletic director, and head volleyball coach. She received numerous awards from regional and national associations for her work as an athletic administrator and volleyball coach. She is one of the most successful volleyball coaches in Michigan, ranking fifth in the state for all-time wins in an entire career.

Smith is the director of the Learning and Assessment Center at Michigan State University. She earned her bachelor’s degree in nursing from SVSU in 1985. Smith serves as chair of accreditation for the International Society of Simulation in Healthcare (SSH) and the Quality Assurance Chair for the American Heart Association Great Lakes Emergency Cardiovascular Care Committee.

Wischmeyer served in the U.S. Army from 1975-78, receiving an honorable discharge as a sergeant. He used the G.I. Bill to attend Delta College and SVSU, where received his bachelor’s degree in management in 1984. Since 2010, Greg has served as president and CEO of Neighborhood Mortgage Solutions. He has been involved in the Frankenmuth Chamber of Commerce for the past 12 years and is a member of the Michigan Credit Union League Mid-Michigan Chapter.

After lettering in baseball and graduating from SVSU in 1989 with a bachelor’s degree in criminal justice, Goble enlisted in the U.S. airborne infantry in 1991. He is still serving and has reached the highest level of technical and tactical expertise as a chief warrant officer 5 and serves as command chief warrant officer. He has spent over 25 years working as a Green Beret and was deployed nine times in Iraq, Afghanistan and Syria. Some of Goble's significant awards include the Bronze Star Medal (five awards), Meritorious Service Medal (three awards), Army Achievement Medal (three awards), Good Conduct Medal (three awards), Army Commendation Medal, as well as National Defense Medal with two Campaign Stars.

Flowers works at University of Detroit Jesuit as a 7th and 8th grade social studies instructor, moderator of the Black Awareness Society of Education (B.A.S.E.), 7th and 8th grade track coach, and high school bowling coach. As a coach, Flowers won a Catholic Youth Organization Track Championship, and a Division I State Championship for bowling in 2014. He was voted Division I Coach of the Year in 2015-16. Flowers received a bachelor’s degree in criminal justice from SVSU in 2007.

Short works as a project manager at Spicer Group. She has implemented innovative strategies to address surface water pollution in Ingham, Berrien and Manistee counties as well as other communities in Michigan. Short also mentors young undergraduate students to provide them with better choices for their career path and serves as a role model for high school students in the community of St. Johns. She received a bachelor’s degree in chemistry from SVSU in 2016.