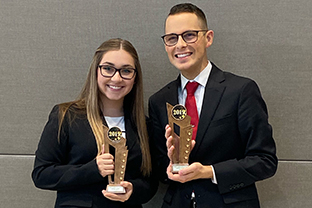 Work ethic and determination helped Lindsey Mead advance far as a moot court competitor; now the Saginaw Valley State University student hopes experience will give her the best chance yet to become a national champion.

The English major from Saginaw in January will become the first student in the 10-year history of SVSU’s top-ranked moot court program to advance three times to the American Moot Court Association national championship tournament.

“I’m very excited,” said Mead, who will advance to the championship tournament with her SVSU teammate Justin Weller, a political science major from Bay City.

The twosome also competed together during the national championship in January 2019. Mead went to the final tournament with a different teammate in 2018.

Acting as teams of two attorneys, students competing in moot court tournaments are tasked with arguing both sides of hypothetical legal cases based on real-life courtroom battles. The competition is judged based on the clarity of the students' argument, their public speaking skills, their ability to answer questions, and how well they know the law and the case.

Last year, Mead and Weller advanced to the round of 32 at the 80-team national tournament. This year, Mead will set her sights higher.

“I’m looking to go beyond what we did last year now that we’re both veterans of the program,” Mead said. “We’ve been reading our arguments together since May.”

Each year, the American Moot Court Association presents a new hypothetical legal case for its competitors to approach. This year’s scenario involves examining the Fourth and Sixth Amendment rights of defendants and witnesses in a hypothetical human trafficking case.

Mead said she felt confident as the national tournament approaches in part because of her respect for the abilities of her teammate.

"I'm so grateful to have Justin by my side," Mead said of Weller. "He is incredibly intelligent, humble, hard-working, and deserving of this moot court success, too."

Besides experience together, Mead and Weller will carry another advantage into the championship scheduled next year in Baton Rouge: They will be accompanied by four classmates from SVSU’s moot court program, which is ranked No. 17 in the nation.

Mead said the three SVSU teams can help each other prepare better to face the nation's top competitors. Last year, Mead and Weller were the only SVSU team in the final tournament.

“Being able to argue these cases against my classmates will be very helpful,” Mead said. “You can bounce ideas off each other.”

Mead’s latest berth in the national tournament arrived the same week she submitted applications to law schools. The senior hopes one day to work as an appellate court attorney.

Mead stays busy outside of moot court and classes. She was selected in 2018 as a member of the SVSU Roberts Fellowship Program, a leadership development initiative for SVSU students. She also serves in a leadership role with the university’s Alternative Breaks program, which sends students to volunteer for nonprofits during the academic year’s holiday recesses.