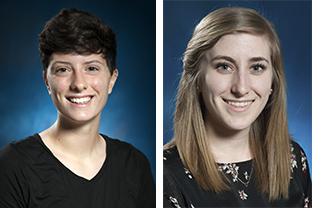 Their dedication to supporting communities — and, in some cases, communities on the other side of the globe — helped two Saginaw Valley State University students win awards from a writing center-centric organization covering Midwest states.

The East Central Writing Centers Association presented its Tutor Leadership Award to Emma Kirsch and its Tutor Of The Year Award to Sam Geffert for their roles working as student-tutors in SVSU’s Writing Center, which provides writing-based support to the university and other select communities.

“To win either of these awards is a significant accomplishment,” said Helen Raica-Klotz, director of the SVSU Writing Center.

It was one of the student’s work in another continent, though, that helped earn her the honor from The East Central Writing Centers Association. Geffert, an English education and English literature double major from Farmington Hills, won her award in part for serving as an English writing tutor at Tokushima, Japan-based Shikoku University. Her visit and service was part of an exchange program with its sister school, SVSU.

“It was a culture shock at first, but it was a perfect fit for what I wanted to go into,” Geffert, a prospective teacher, said of spending summer 2015 in Japan. “Overcoming language barriers is a huge challenge, and it allowed me to apply so many of the skills I was learning at SVSU.”

Geffert also volunteered to participate in the Writing Center’s 10-week workshop program for individuals incarcerated at the Saginaw Correctional Facility in Freeland.

“It’s a great classroom environment,” Geffert said of the 90-minute writing sessions often involving between six to 12 men from the facility. “Once you engage with them, they start generating content together and showing support for each other’s work. They’re grateful for us being there.”

Kirsch, an elementary education major from Saginaw, received her award in part for her work as the student coordinator of the Writing Center community centers established for Bay and Saginaw county residents. At both Butman-Fish Branch Library in Saginaw as well as Alice and Jack Wirt Public Library in Bay City, SVSU Writing Center student-tutors such as Kirsch offer writing-based workshops on a regular basis.

“Because of her dedication and commitment, we have helped over 500 community members of all ages, providing them with workshops and tutorial sessions designed to improve their writing,” Raica-Klotz said.

Kirch said serving the community keeps her motivated to continue working hard as a tutor.

“The roles I hold as a tutor and coordinator of the community writing centers give me opportunities for immense personal and professional growth, but more importantly, they give me a chance to help others,” Kirsch said. “Connecting with and helping writers and community members is what makes my positions truly important to me.”

For more information about the SVSU Writing Center, its student-tutors and many services, visit svsu.edu/writingcenter.