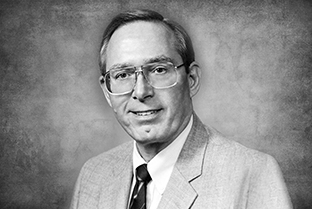 Ryder, who died in April at the age of 90, helped establish SVSU's value academically and culturally to the region during some the institution's most formative years.

The June 4 service is scheduled at 3 p.m. in SVSU's Founders Hall, and a reception will follow inside the university's Marshall M. Fredericks Sculpture Museum. The ceremony will feature tributes from Donald Bachand, SVSU's current president; as well as Eugene Hamilton and Robert Yien, who each served in leadership roles during Ryder's administration before they retired. SVSU’s Cardinal Singers vocal ensemble will perform at the ceremony.

The SVSU Board of Control appointed Ryder as SVSU's second president on Oct. 17, 1974. He came to SVSU from Indiana University-Purdue University Indianapolis where he served as vice chancellor and dean for administrative affairs. When he arrived as president, he noted that many people mistakenly perceived SVSU – then Saginaw Valley College – as a junior college, in part because the institution was founded a decade earlier by many individuals once associated with nearby Delta College. During Ryder's 15 years as president, he worked tirelessly to create a strong identity for SVSU as a baccalaureate institution. Many considered him successful in that mission.

Under Ryder's guidance, SVSU grew substantially in terms of campus size, student enrollment and academic stature, adding highly regarded programs in engineering and nursing, among others. The evolving name of the institution also was a product of Ryder's effort to change public perception. Shortly after his arrival, the school changed its name to Saginaw Valley State College, and in 1987 became Saginaw Valley State University.

Under his leadership, SVSU constructed many of the buildings that form the campus' structural backbone today. Among the buildings erected during his presidency were Pioneer Hall, Brown Hall, Zahnow Library, the Arbury Fine Arts Center, the Marshall M. Fredericks Sculpture Museum and the athletics facility named after him, the Ryder Center.

Enrollment more than doubled during his tenure. In 1974, 2,638 students were enrolled at SVSU. During his final academic year in office, 5,915 students took classes at the university.

Ryder retired in May 1989 and spent his later years in North Carolina with his wife, Lila, who survives him. He was a frequent guest at SVSU over the years. Visiting with his wife during SVSU's 50th anniversary ceremony in 2013, Ryder spoke fondly about his time as president.

“Our experience with all of you has enriched our lives immeasurably,” he told a room of former colleagues and friends during that visit. “Just as Lila and I love the United States of America as the greatest nation the world has ever seen, we love Saginaw Valley State University for all it has been and for all it will become in service of this state, our nation and the world.”

The full text of Ryder’s remarks at SVSU’s 50th anniversary celebration in November 2013 can be found at www.svsu.edu/50/historyofsvsu/ryderera/

Or watch the video of Ryder's visit here: https://youtu.be/16VCLsZCORc?t=1626