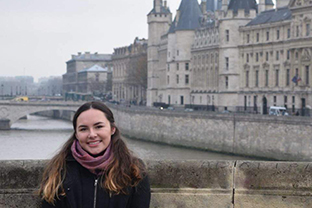 A Saginaw Valley State University alumna with a handle on several world languages recently was honored for her mastery of French.

Alexis Chavarria, who earned an SVSU bachelor’s degree in Spanish earlier this month, received the French Award from The American Association of Teachers of French.

The award is presented annually to a graduating senior who demonstrated excellence in the study of French as well as exceptional commitment to French language and the many cultures where it is spoken.

Recipients must have completed at least three years of French study at the time of graduation and be non-native speakers of French.

The American Association of Teachers of French was founded in 1927 and has its mission as “the promotion of the study of French language and French-speaking literature and cultures of all levels.”

For more information on the organization, go to www.frenchteachers.org.