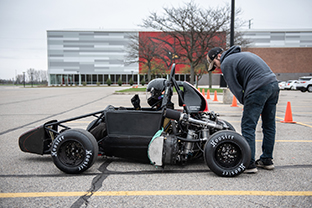 A year’s worth of hard work, dedication, late nights and early mornings will culminate with the literal and metaphoric rubber meeting the road this week for Saginaw Valley State University’s Cardinal Formula Racing team as it faces the world’s top collegiate talent in Indy-style racing.

And team members have high expectations when competition gets underway at the annual Formula Society of Automotive Engineers (FSAE) Collegiate Design Series May 8-11 at Michigan International Speedway in Brooklyn, Michigan.

“We’re expecting a top-10 finish,” said Jared Greshow, a mechanical engineering major from Bay City who serves as Cardinal Formula Racing’s team captain this year. “That’s been the goal since we started this last year, and I’m feeling good about this car now that we’re ready to compete. It looks good and it feels good.”

A top-10 finish would be the program's third in its history. The 2002 team placed sixth and the 2005 crew finished fifth. Each year, a multidisciplinary team of SVSU students design and build an Indy-style race care to compete against colleges and universities from around the world.

For four consecutive years, SVSU’s team has recorded the highest finish of any exclusively undergraduate program. Brooks Byam, an SVSU professor of mechanical engineering and the team’s adviser since 1998, said this year’s team has possessed an advantage in its preparation.

Among those experienced students was Greshow, who was involved in the 2017 and ’18 teams. The 2019 model will benefit from at least one important lesson learned from earlier builds, he said.

“We wanted to spend less time in the theoretical design phase and more quickly move to building the car,” Greshow said. “We wanted to be able to test it earlier. In this contest, being able to test your work can really help.”

Last year’s team scrambled in the week leading up to the FSAE competition after an engine failed. Greshow said a similar complication challenged this year's team, but because the vehicle was built sooner, the problem was resolved well before the event.

The team applied the first component to the car's frame in early July 2018 and began test-driving the vehicle in January. Both milestones arrived relatively early compared to previous years, he said.

“We’ve pulled a couple of all-nighters in the past few months to get to this point,” he said. “All the hard work is worth it.”

This year's FSAE field features 119 teams from countries across the world including Austria, Brazil, Germany, Poland and Venezuela. The level of participation from outside the U.S. has increased the level of the competition's talent immensely in recent years, Byam said.

Still, Cardinal Formula Racing consistently performs well. Twice SVSU has built the fastest college race car in the world, winning the event’s acceleration category in 2008 and 2014. The team placed No. 24 overall out of 120 competitors last year.