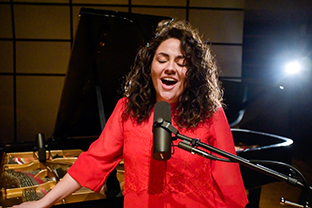 After years spent working tirelessly to reach her potential as a vocalist, Alivia Combs is rising to the top of the singing competition among her peers.

The Saginaw Valley State University student’s singing prowess earned her a first-place award from a panel of judges at a National Association of Teachers of Singing regional contest for competitors from Michigan, Indiana, Ohio and Ontario. She bested her peers in the category for female junior and senior college students.

“I never try to think of these competitions in a way of winning or losing, but just to gain new experiences,” Combs said. “When they called my name, I was shocked."

The music major is no stranger to delighting audiences. It’s a scenario that dates back further than her memory can recall. The Warren native said her mother often recounts tales of Combs as a toddler, belting out tunes during the family’s grocery store visits, then earning praise from strangers in the shopping aisles.

She carried that love of singing with her at first to the Detroit Institute of Music Education, where one of the educators there — Elizabeth Belluni — recognized a talent in need of fine-tuning.

“When I first started at the institute, I was singing with a lot of tension and pressure, which is unhealthy and doesn’t sound the best.” Combs said.

Belluni helped Combs improve her vocal techniques, recommended exercises aimed at strengthening her ability to sing, and prepared her for life as a performer after college, she said.

That student/mentor relationship continues today at SVSU. Combs said she enrolled at the university in fall 2018 after Belluni joined SVSU's Department of Music as an adjunct faculty member.

“Without her, I wouldn’t be able to do any of this,” Combs said.

A recipient of the university’s Rhea Miller Scholarship in Music, Combs said her hard work at SVSU is focused on a single goal: To become a musical theatre performer. She dreams of landing roles such as the lead in the Tony Award-winning musical, “Waitress."

After graduating next year, Combs plans to pursue a musical theatre career in Chicago. She already has traveled to the Windy City multiple times to audition for roles.

“The end goal would be to move to New York City, for Broadway,” she said. “I’m taking the stepping stones to get there.”