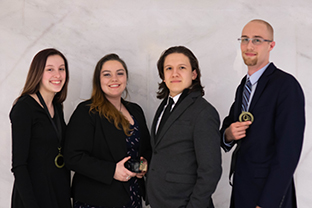 After another strong performance in a statewide contest, a Saginaw Valley State University student qualified to compete in a second event at the National Forensics Association Championship Tournament.

Top Novice honors are given to students who have both competed in fewer than six tournaments in the forensics league and placed highest in a particular category.

His performance Saturday will allow him to compete in a second category — Extemporaneous Speaking — at the national championship.

Jessica Carpenter, an English major from Saginaw, also will represent SVSU in Santa Ana after placing sixth in Poetry during the March 2 state championship.

The SVSU Forensics Team next will compete in the National Speech Championship scheduled March 23-24 at Oakland University.