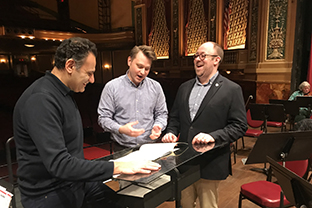 With a strong communal spirit, Saginaw Valley State University's Concert Choir will join forces this week with The Saginaw Bay Symphony Orchestra and Saginaw Choral Society for a concert event presented at a grand scale.

“It's pretty massive,” said Kevin Simons, director of the SVSU Concert Choir and an SVSU associate professor of music. “This is probably the biggest choir I've ever worked with.”

The concert, titled “Music & Voices: Saginaw Rising,” is scheduled Saturday, March 30, at 8 p.m. in the Temple Theatre in downtown Saginaw.

Fouad Fakhouri, the music director for The Saginaw Bay Symphony Orchestra, said he's never worked with so many musicians during a single concert.

“These types of performances don't happen often,” he said. “I'm tremendously excited for this collaboration.”

There are 50 students involved in SVSU's choir and about the same number of Saginaw Choral Society musicians, Simons said. He also will perform as one of seven soloists.

Simons said his choir and its community companions recently began rehearsals, and the early chemistry between the groups has him excited for Saturday's event.

“The music was thrilling,” said Simons.

Organizers of the event say they have hoped for such a collaboration for years.

“I've always wanted to do this,” said Fakhouri, who joined The Saginaw Bay Symphony Orchestra in 2016. “I know Kevin quite well, and I know the choirs will be ready for this level of performance.”

The concert will be an experiential thrill for students with the SVSU Concert Choir, Simons said. While the group has worked with the Saginaw Choral Society before, this will mark their first teaming with a symphony.

“I remember the first time I sang with an orchestra like that,” Simons said. “It was memorable. You never forget it.”

What will add to the experience is the prestige of the venue, he said. The Temple Theatre represents one of the region's most historic performing arts centers. The 1,750-seat theatre — which first opened in 1927 — features an intricate, neo-classic design reinforced by large-scale restoration work over the years.

“This is going to be a great opportunity for our students to play in the Temple and perform with people in the community,” Simons said. “It will be a great day for SVSU singing, and it shows what a leader we are in the culture of this region.”