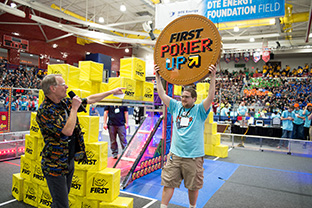 For the third consecutive year, Saginaw Valley State University will host one of the state’s largest competitions featuring future generations of STEM professionals.

About 5,500 high school students are expected to participate in the FIRST Robotics state championship Wednesday through Saturday, April 10-13, at SVSU’s Ryder Center. The competition is expected to attract more than 8,000 visitors to the Great Lakes Bay Region, including parents, professional mentors and spectators.

Adrianne Cole, director of STEM at SVSU and one of the competition’s coordinators, said FIRST Robotics fits well with the university’s mission to stimulate interest in the sciences among the young.

"Through STEM at SVSU programs, students explore real-world problems through project-based learning and interact with STEM professionals," she said.

"STEM education fosters tenacity in students so that they can successfully face adversity in the future," Cole said.

The FIRST Robotics event at SVSU will feature 160 teams from high schools across Michigan that qualified for the state championship after performing exceptionally during earlier regional competitions. On average, 40 students participate on each team. Along with handling the robotics-related work, students throughout each season of FIRST Robotics competition are involved in several activities relating to strengthening their respective teams including fundraising and marketing.

Practice sessions and robot repairs will take place in SVSU’s Fieldhouse while the competition will be held in O’Neill Arena of the Ryder Center.

In each round of competition, three teams compete, using autonomous and remote-controlled robots piloted by students, battling to earn points during a two-minute round. The type of game played changes during each FIRST Robotics competitive season, which largely spans the length of the high school academic calendar.

Each year, an overarching theme — often relating to a STEM industry — is reflected in the rules and mechanics of the games played at the competition. The theme for the 2019 FIRST Robotics competition is “Destination: Deep Space," presented by The Boeing Company. "Destination: Deep Space" features two alliances of “deep space travelers” competing to place polycarbonate hatch covers and cargo on “rockets and cargo ships” before returning to “a safe habitat.”

The following is a video demonstration of the 2019 FIRST Robotics game, "Destination: Deep Space."