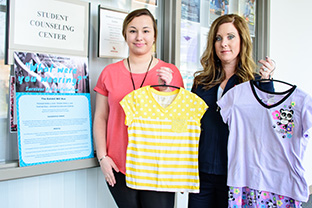 There are few crimes, Shawn Schutt points out, where the victim bears some burden of blame from the public. Survivors of sexual assault too often are blamed for the crime committed against them, he says.

“They will sometimes be asked, ‘How much did you have to drink,’ or, ‘What were you wearing when it happened,’” says Schutt, a prevention education coordinator at Underground Railroad Inc.

“But it isn’t the victim’s fault.”

Raising awareness and shifting that burden of blame away from sexual assault survivors is the objective behind a Saginaw Valley State University-hosted exhibition next week, titled “What Were You Wearing?”

The exhibition, which will display clothing worn by survivors of sexual assault when those crimes happened, will open with an event featuring Schutt as a guest speaker Monday, April 1, from 6 p.m. to 8 p.m. in SVSU’s Alumni Lounge in Curtiss Hall. Later, the exhibition will be moved to the hallway outside SVSU’s Student Counseling Center in Curtiss Hall, room C112, from Tuesday to Friday, April 2-5, from 8 a.m. to 4:30 p.m. each day.

Among the items that will be displayed are children’s pajamas, casual attire and swimwear.

The idea was inspired by a similar exhibition at University of Arkansas.

“We really want to debunk the myth that what they were wearing is the reason a survivor was sexually assaulted,” says Ashley Corwin, a student intern at SVSU’s Student Counseling Center.

Corwin hopes attendees will better empathize with survivors when seeing the variety and common types of clothing worn during those crimes.

Schutt, who earned a bachelor’s degree in health science from SVSU in 2016, said he hopes “What Were You Wearing?” connects with attendees.

“By asking victims those types of questions — like ‘What were you wearing?’ or ‘How much did you have to drink?’ — we’re making it easier for perpetrators to get away with these crimes,” he says. “It’s important to raise awareness about this.”

The initiative also will serve as an educational tool for student interns in the SVSU Student Counseling Center, says Dana Carley Kaczynski, an assistant director with the office helping to supervise the effort.

“The exhibit gives the interns an opportunity to participate in an outreach project that involves collaborating with a community agency, and see it from beginning to end,” she says.

“Ultimately, the message of this particular project is something that hits home for us as counselors as we work with survivors of sexual assault here at our Student Counseling Center every day. It is very important to each of us to share this message with the campus community.”

The opening event and week-long exhibition are free and open to the public.