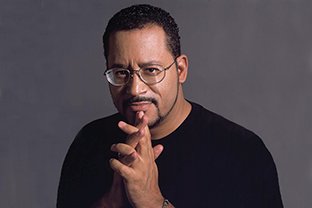 The Detroit native will serve as the keynote speaker at the SVSU-hosted Equity in the Classroom conference Sunday, March 17, at 6 p.m. in SVSU’s Malcolm Field Theatre for Performing Arts. The event featuring Dyson is free and open to the public.

An outspoken voice on a range of social issues - including race, politics, religion and culture - Dyson is recognized nationally both for his television appearances on top-rated political talk shows as well as his best-selling books and newspaper columns.

“Michael Eric Dyson is one of our nation's preeminent thought leaders,” said Mamie T. Thorns, the SVSU special assistant to the president for Diversity Programs who helped organize Dyson's visit.

“His talents as an orator and his deep, scholarly understanding of our culture gives him a commanding presence as a speaker. Whether you agree or disagree with what he is saying, he has a true talent to engage audiences and encourage meaningful discourse.”

Dyson - the recipient of an American Book Award and two NAACP Image Awards - has appeared on TV programs such as Meet The Press, Face The Nation, The Late Show with Stephen Colbert, Real Time with Bill Maher, Good Morning America, and the Today Show.

Along with working as a New York Times op-ed writer, Dyson serves as a contributing editor for both The New Republic magazine as well as ESPN's The Undefeated website.

His 19 books include New York Times bestsellers such as “Is Bill Cosby Right? Or Has The Black Middle Class Lost Its Mind?” His 1994 book, “Making Malcolm: The Myth and Meaning of Malcolm X,” was considered one of the most important African-American books of the 20th century and was also named a “Notable Book of the Year” by The New York Times. His book, “The Black Presidency: Barack Obama and the Politics of Race in America,” was a finalist for the prestigious Kirkus Prize in 2016.

His latest New York Times Bestseller, “What Truth Sounds Like: RFK, James Baldwin, And Our Unfinished Conversation About Race In America,” was a recipient of The 2018 Southern Book Prize.

Dyson also serves as a sociology professor at Georgetown and as an ordained minister.

Karen S. Carter, the chief inclusion officer for The Dow Chemical Company, will serve as moderator for Dyson's discussion during his visit to SVSU. In January 2018, Carter was the keynote speaker at the Great Lakes Bay Regional Martin Luther King Jr. Celebration at SVSU.

For more information about Dyson, visit his website at www.michaelericdyson.com.