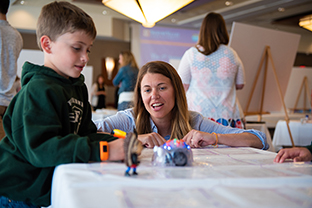 More than 1,000 students in the Freeland Community School District were inspired to learn about computer coding – and the power of scientific persistence – thanks to a teacher's participation in a Saginaw Valley State University-hosted program aimed at enriching STEM education regionally.

Jessi Koehler, who teaches STEM curriculum in the Freeland Community School District, was a member of the latest group of K-12 teachers participating in the Dow Corning Foundation/SVSU STEM Community Partnership. The professional development program equips educators with training and resources to generate interest in the sciences among the region's youth.

Thanks in part to her participation in the initiative, Koehler created an academic program this school year that engaged students across the district in computer coding science and robotics, impacting youths from grades 1 to 6.

“In their eyes, they were playing with robots, so they loved it,” said Koehler, now in her 18th year as an educator. “You could tell, as the year went on, they began to see the robots as tools - and not just the toys they initially believed them to be. They still get pretty excited when the robots come out.”

The program, which she called "Bringing Coding To Life," tasked students with programming computer codes to command robots designed for such educational endeavors.

Many of the students used online resources such as the website code.org to engage in the coding experience, she said. They applied their learning to program command codes into robots purchased using Dow Corning Foundation/SVSU STEM Community Partnership resources. Younger students utilized Blue-Bot robots while their older peers worked with Dash and Dot robots.

“The basis of the project was to see if students working on coding would begin to show more of a growth mindset toward problem-solving throughout the school,” Koehler said.

“We began talking about using a growth mindset in the lower grades by reading picture books with characters that never give up, even when it appears as if they failed. Older grades talked about famous fails in history by successful people.”

Koehler said that, after conversations with fellow teachers who shared students exposed to her computer coding curriculum, the program appeared to have an influence even outside of STEM-related studies.

“Almost all of the teachers said that they saw students using more of a growth mindset in the general education classrooms as well,” she said. “That they are able to carry it over to a different environment shows me that it has made an impact on the students."

Koehler was among 20 Great Lakes Bay Region K-12 educators selected to participate in the 2018-19 Dow Corning Foundation/SVSU STEM Community Partnership. Each year, a new class of 20 participants is selected. The initiative begins with a two-week, summertime professional development program housed at SVSU. Koehler and her peers partnered with SVSU faculty and staff to develop strategies for improving STEM education in the region.

“Bringing Coding To Life” was influenced heavily by that experience, Koehler said.

“I really like the ability to share ideas and talk to other like-minded teachers,” she said. “It is great to be able to network with others.”

The Dow Corning Foundation/SVSU STEM Community Partnership was established in 2013. For more information about the program, go to www.svsu.edu/dowcorningfoundationfellows.